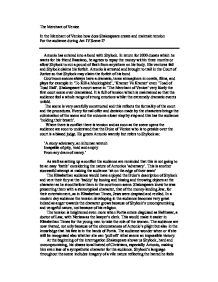 In the Merchant of Venice how does Shakespeare create and maintain tension for the audience during Act IV Scene I?

The Merchant of Venice In the Merchant of Venice how does Shakespeare create and maintain tension For the audience during Act IV Scene I? Antonio has entered into a bond with Shylock. In return for 3000 ducats which he wants for his friend Bassiano, he agrees to repay the money within three months or allow Shylock to cut a pound of flesh from anywhere on his body. His ventures fail and Shylock claims his forfeit. Antonio is arrested and brought to trail in the Court of Justice so that Shylock may claim the forfeit of his bond Courtroom scenes always have a dramatic, tense atmosphere in novels, films, and plays for example in 'To Kill a Mockingbird', 'Kramer Vs Kramer' even 'Toad of Toad Hall'. Shakespeare's court scene in 'The Merchant of Venice' very likely the first court scene ever dramatised. It is full of tension which is maintained so that the audience feel a whole range of strong emotions whilst the extremely dramatic events unfold. The scene is very carefully constructed and this reflects the formality of the court and the procedures. Every formal offer and decision made by the characters brings the culmination of the scene and the outcome closer step by step and this has the audience 'holding their breath'. ...read more.

Shylock's language throughout the scene includes imagery of a vile nature reflecting the hatred he feels and his desire to gain revenge. These include 'rat baned', 'gaping pig', 'urine' 'hate' and 'loathing'. This contrasts well with Antonio's resignation to his fate and his noble patience. 'I do oppose My patience to his fury' Antonio and Shylock's battle; hatred, revenge and profit against friendship, love and mercy provokes an unrelenting tension throughout the scene. Good versus evilin any tale is a fascinating conflict and one which one is compelled to witness to the end. Portia carefully lures Shylock into the 'trap'. Step by step she leads Shylock on until he is certain of triumph. She knows that she is going to 'turn the tables' on him at the last moment. This careful build-up, starting with her famous 'quality of mercy' speech at which Shylock remains unmoved raises Shylocks hopes of victory and the audience fears for Antonio as nothing but mercy appears to be his escape from Shylocks forfeit. The Duke and Portia have already appealed for mercy without success. Antonio's fate already seems sealed when Portia eventually says that the law has to be withheld; 'there is no power in Venice Can alter a decree established.' Shylock thinks that he will be triumphant. ...read more.

He can have nothing but the bond and if he sheds Antonio's blood or takes more than one pound of flesh he will die and all his goods will be confiscated. Portia allowed Shylock several opportunities to show mercy, to take the money before outwitting him and it makes it all the more satisfying that she has managed to do so. Shylock has to plead for his life for threatening the life of a Venetian. He is shown mercy although he showed none himself and is allowed to live. However, he must give half his good state and half to Antonio. Antonio allows Shylock to keep half of his capital if he converts to Christianity and leaves everything to Lorenzo and Jessica in his will. Shylock is left destroyed and ridiculed. It is very satisfying to see the wicked character defeated. The Elizabethan audience would particularly relish the fact that he must convert to their religion. Throughout the scene the audience is aware of the identity of the lawyer and the clerk and the payment by Gratiano and Bassanio of their wedding rings brings more drama and tension as they have promised never to part with them. This prepares us for Act 5 that promises some comic relief with which to reduce the emotional intensity of scene 4. ...read more.