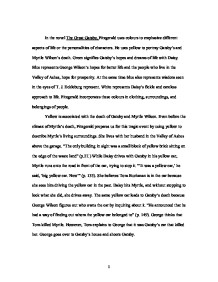 In the novel The Great Gatsby, Fitzgerald uses colours to emphasize different aspects of life or the personalities of characters.

In the novel The Great Gatsby, Fitzgerald uses colours to emphasize different aspects of life or the personalities of characters. He uses yellow to portray Gatsby's and Myrtle Wilson's death. Green signifies Gatsby's hopes and dreams of life with Daisy. Blue represents George Wilson's hopes for better life and the people who live in the Valley of Ashes, hope for prosperity. At the same time blue also represents wisdom seen in the eyes of T. J. Eckleburg represent. White represents Daisy's fickle and careless approach to life. Fitzgerald incorporates these colours in clothing, surroundings, and belongings of people. Yellow is associated with the death of Gatsby and Myrtle Wilson. Even before the climax of Myrtle's death, Fitzgerald prepares us for this tragic event by using yellow to describe Myrtle's living surroundings. She lives with her husband in the Valley of Ashes above the garage. "The only building in sight was a small block of yellow brick sitting on the edge of the waste land" (p.27.) While Daisy drives with Gatsby in his yellow car, Myrtle runs onto the road in front of the car, trying to stop it. ...read more.

Whenever the green light shines at the end of Daisy's house, it represents Gatsby's hope that he will someday be able to live with Daisy. "She never loved any one except me!" (p.124) Gatsby believes that Daisy will leave Tom and go and live with him but Daisy cannot say that she never loved Tom so Gatsby gets embarrassed. Tom spoils Gatsby's chances with Daisy by humiliating him. Gatsby asks Daisy to come over one night. She does not and once Gatsby realizes this, his hope for Daisy is over and he no longer sees the green light. "'I waited, and about four o'clock she came to the window and stood there for a minute and then turned out the light'" (p.140) When the light was "turned out" Fitzgerald uses this as a symbol of Gatsby's end of hope and dream. Blue represents hope in the story. Tom's blue car represents Tom's hope that he will be able to repair his relationship with Daisy. T. J. Eckleburg's eyes show that there is hope for the people in the Valley of Ashes. ...read more.

She first does not marry Gatsby because he is poor. She marries Tom because he is rich. Her life does not really have any meaning because she does not do anything with it. She drives a white car, "They had driven in her white car." (p.145), her curtains in her house are all white. "The windows were ajar and gleaming white against the fresh grass outside" (p.13), she and even her friend dresses in white. "They were both in white, and their dresses were rippling and fluttering as if they had just been blown back" (p.13). The white surroundings and belonging represent her shallow and superficial life. Fitzgerald successively portrays one character with one colour. In this case it is Daisy who is associates with white colour. The characteristics are shown by colours in the Great Gatsby. As people come to their death, yellow signifies the end of their lives. Daisy is Gatsby's green light witch represents his hope. Blue represents hopes and wisdom for many people throughout the novel and white represents fickleness of Daisy. F. Scott Fitzgerald does a good job using colours as characteristics because he uses the same colours for the same characteristic over and over again. ?? ?? ?? ?? 1 ...read more.