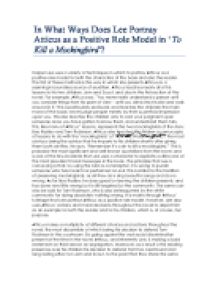 In What Ways Does Lee Portray Atticus as a Positive Role Model in To Kill a Mockingbird?

In What Ways Does Lee Portray Atticus as a Positive Role Model in 'To Kill a Mockingbird'? Harper Lee uses a variety of techniques in which to portray Atticus as a positive role model to both the characters of the book and also the reader. The first of these methods is the way in which she presents Atticus as a seemingly boundless source of erudition. Atticus teaches nearly all of his lessons to his two children, Jem and Scout, and also in the first section of the novel. For example, Atticus says, "You never really understand a person until you consider things from his point of view - until you climb into his skin and walk around in it." ...read more.

He says, "Remember it's a sin to kill a mockingbird." This is probably the most significant and well-known quotations from the novel, and is one of the few incidents that Lee uses a character to explicitly outline one of the most prevalent moral messages in the book. The principle that Lee is conveying is that, by using the bird as a metaphor, it is wrong to punish someone who has meant nor performed no evil. This is similar to the tradition of preserving mockingbirds, as all they do is sing beautiful songs and do no wrong. As for Boo Radley, he does good by leaving the children presents, and has done very little wrong but is still targeted by the community. ...read more.

Atticus makes a multiplicity of different choices and actions throughout the novel, the most discernible of which being his decision to defend Tom Robinson in the courtroom. By going against the vast racial discrimination present at the time in the novel, Atticus, and inherently Lee, is making a bold statement on their stance on segregation. Moreover, as a result of his residing presence over his children his decision to defend Tom has a profound and long lasting effect on Jem and Scout, to the point that they share the same morals with their father. Another way in which Atticus' actions contributes towards his image as a role model is in his decision to employ Calpurnia, the family's black housekeeper. This also represents Lee's purpose for "To Kill a Mockingbird', much like the previous action and makes Atticus seem like even more of a positive role model to the reader. ...read more.