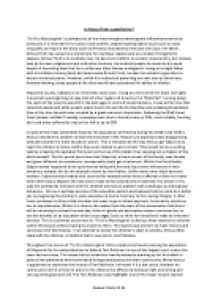 Is Atticus Finch a good father?

﻿Is Atticus Finch a good father? ?To Kill a Mockingbird? is perhaps one of the most thought-provoking and influential novels ever produced; it is revered for its humour and warmth, despite tackling taboo issues such as racial inequality and rape in the deep south of America. Narrated by nine year old Scout, her father, Atticus Finch has served as a moral hero for countless readers and as a model of integrity for lawyers. Atticus Finch is no ordinary man. He does not conform to society?s mannerisms, but instead, lives by his own judgements and instinctive courtesy. He treats all people he meets as his equal, despite it becoming clear that he is unlike any other literary protagonist. Living as a single father with his children Jeremy (Jem) and Jean-Louise (Scout) Finch, he does his utmost to give them a decent moral education. However, whilst his methods of parenting are now seen as liberal and forward-thinking, many people at the time would have questioned his ability as a father. Maycomb County, Alabama is an inherently racist town. Living at a time when the black civil rights movement was beginning to take hold of other regions of America, the ?Bible Belt? running along the south of the country was still in the dark ages in terms of social harmony. ...read more.

The Tom Robinson case highlights one of the major lessons learned by Jem and Scout during the course of the novel. Atticus encourages the children not to judge people and have any prejudices, he does this as he is courteous to everybody, regardless of their race, social class or even behaviour towards him. He shows the utmost self restraint and dignity when Mr Ewell spits in his face, he does not retaliate. Mrs Dubose provides the stark realisation that there are always two sides to a person by her split personality. On one hand, she is hated by the children for her cruel remarks and bad temper, however, she is admired by Atticus for her bravery and courage as she fights a morphine addiction. This is one of many indications of Atticus?s ability to recognise the good in everybody and behaves with empathy. This allows him to understand people?s motivation and therefore make some allowances for their actions. He passes on this trait to Scout and advises her that you never really understand a person until you ?step into his skin and walk around in it?. Atticus is also free from the inherent hypocrisy and double standards that appear rife among the population of Maycomb with Miss Stephanie Crawford leading the charge ? he is ?the same in his house as he is on the public streets.? Atticus appears to have the demeanour that is applauded in any father. ...read more.

His honesty with his children means that they trust him, and look to him for guidance. On the other hand, he is a kind, compassionate and widely respected character in the world of literature and has inspired fathers and lawyers for generations. I feel that Atticus Finch is most definitely a ?fine folk? he does the best he can with the sense he has and never feels that he has done enough for his children. It would seem that although the people of Maycomb could not appreciate the liberal parenting techniques of Atticus, it has now become commonplace for families to have more open relationships with each other and discuss topics previously untouched. While Atticus holds his children to the same high standards as he holds himself, he also is there for them when they need him. The last sentence of the novel reinforces this aspect of his character: ?He turned out the light and went into Jem's room. He would be there all night, and he would be there when Jem waked up in the morning?. Even when Jem is unconscious and has no way of knowing is happening, Atticus is there for him ? because it?s the right thing to do, even if there is nobody watching? That would fit with what we know about Atticus, but perhaps there?s a simpler reason: love. Eleanor Chick 11,1A ...read more.