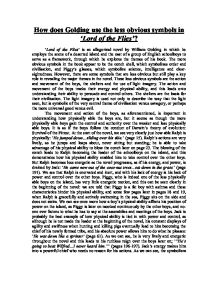 Less Obvious Symbols in Lord of the Flies

How does Golding use the less obvious symbols in 'Lord of the Flies'? 'Lord of the Flies' is an allegorical novel by William Golding in which he employs the scene of a deserted island and the cast of a group of English schoolboys to serve as a framework, through which he explores the themes of his book. The more obvious symbols in the book appear to be the conch shell, which symbolizes order and civilisation, and Piggy's glasses, which symbolize science, intelligence and clear-sightedness. However, there are some symbols that are less obvious but still play a key role in revealing the major themes in the novel. These less obvious symbols are the action and movement of the boys, the shelters and the use of light imagery. The action and movement of the boys tracks their energy and physical ability, and this leads onto understanding their ability to persuade and control others. The shelters are the basis for their civilisation. The light imagery is used not only to describe the way that the light seen, but is symbolic of the very central theme of civilisation versus savagery, or perhaps the more universal good versus evil. ...read more.

We can see once more how a boy's physical ability affects his position of power on the island, as Piggy is later on mocked continuously by the other boys, and no-one ever listens to what he has to say at the assemblies and meetings of the boys. Jack is probably the best example of how physical ability is tied in with power and control, as although he is not made the leader at the beginning of the novel, his constant displays of agility and swiftness when hunting and killing pigs eventually lead to him becoming the chief of his newly formed tribe, and his absolute power allows him to do what he pleases: 'He was down like a sprinter' (page 61). As we can see, he is very lively and energetic throughout the novel and this leads to his ruthless reign over the boys later on; '"He's going to beat Wilfred...I never heard him."' (pages 196-197). Jack's energy makes him into a powerful chief who needs no reason for his actions. As we can see, the symbolism in the imagery of actions and movements is essential to discovering the vitality of each boy, and with that their power over the others. ...read more.

At the beginning of the second chapter, titled Fire on the Mountain, a scene is described where Ralph is calling an assembly, and we are told that light is being brought in from the afternoon sun, and scattered by a sudden breeze; the boys are in good, and civilised, spirits in a time of light and brightness. 'In the darkness of the early morning...over the rocks and fled.' (pages 119-122). As we can see the twins fear that they have encountered the beast; a bad event which took place in darkness. As the novel continues, Golding uses less imagery of light, and more imagery of darkness, and so the novel and the boys descend into savagery and badness. As we can see, Golding uses the symbols of the motion of the boys, the shelters, and the imagery of light and dark to support the themes and concepts in his novel. The movement of the boys traces their energy and also their power over the other boys. The shelters are a model of the civilisation and democracy on the island. The light imagery used to bring out the idea of goodness and civilisation, and is the antithesis to the dark imagery that is used to produce the concept of badness and savagery. ?? ?? ?? ?? ...read more.

This is an articulate, perceptive essay which shows understanding and insight. Quotes are well used, but more are needed to make this more specific and detailed. Nearly top marks! ****

This candidate writes a response to a question about the "less obvious" symbolism in William Golding's 'Lord of the Flies'. The answer accurately identifies three very apt allegorical elements that contribute to the novel Golding has written (symbolism of light, ...

This candidate writes a response to a question about the "less obvious" symbolism in William Golding's 'Lord of the Flies'. The answer accurately identifies three very apt allegorical elements that contribute to the novel Golding has written (symbolism of light, the shelters, and the movement of the boys). There is an unbroken focus on the question proposed and the essay is structure coherently in order to properly address each allegory in turn.

The Level of Analysis is extremely good, and wholly indicative of a candidate operating at a high A grade/low A* grade for GCSE. There is an excellently-expressed understanding of the entire novel, and the candidate does well to satisfy the examiner's desire to see candidates who thoroughly understand the entirety of the novel's they analyse inside and out. The identification of the themes chosen is a task in itself but to draw such precise and rounded analysis from them suggests a candidate with a high level of analytical ability. The candidate would do well however, to mention the phrase "pathetic fallacy" as a linguistic device that aims to give emotions to non-human things - usually the weather. Similar to personification, pathetic fallacy deals particularly with emotional personification, and the way the candidate comments on Golding's use of light and dark as a means of projecting the mood and atmosphere of the novel at the time is very thorough, though I might argue that the comment about the novel gradually seeing a much darker tone to the weather as it progresses could be developed further.

The Quality of Written Communication is very high. This answer is thoroughly clear and gives a distinct impression of a candidate who is either an extremely good typist or has read and re-read their answer for inconsistencies and errors in their written expression and have corrected them.