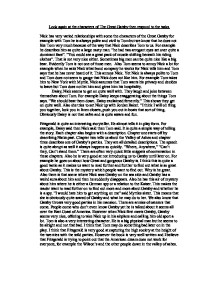 Look again at the characters of The Great Gatsby then respond to the tasks. Nick has very varied relationships with some the characters of the Great Gatsby for example with Tom he is always polite and civil to Tom but we know that he does not like Tom very much because of the way that Nick describes Tom to us. For example he describes him as quite a large nasty man. "he had two arrogant eyes set over quite a dominant face". "You could see a great pack of muscle shifting beneath his riding clothes". That is not very nice either. Sometimes big men can be quite nice like a big bear. Evidently Tom is not one of those men. Also Tom seems to annoy Nick a lot for example when he asks Nick what bond company he works for Nick tells him and Tom says that he has never heard of it. ...read more.

Each chapter also begins with a description. Chapter one starts off by describing Nicks past. Chapter two tells us about the Valley of Ashes and chapter three describes one of Gatsby's parties. They are all detailed descriptions. The speech is quite abrupt as well it always happens so quickly. "Where, Anywhere," "Can't they, Can't stand them." There are often very quick little snippets of conversation in these chapters. Also he is very good at not introducing us to Gatsby until later on. For example he goes on about how Great and gorgeous Gatsby is. I think this is quite a good tactic as it makes us want to read further and further to find out what is so great about Gatsby. This is the mystery which people want to find out. Why is he great. Also there is that scene where Nick sees Gatsby on the sea side and Gatsby has a weird aura about him and then he suddenly disappears. ...read more.

I think that Fitzgerald is very good at capturing the high society at the height of the twenties with the wild parties. However the book is very well written and I believe that Fitzgerald is trying to point out that the American dream does not work for everyone, for example the Wilson's and the other people down in the valley of ashes. There are quite a few re-occurring themes in the book. For example motor cars are a very good example. All the rich people have cars. For example Gatsby has a huge Rolls Royce. Tom obviously has a very nice car as Wilson comments on it and thinks he can make quite a lot of money from it. Also Nick who appears to be the struggling bond salesman but is from good people has an old dodge. There is also a good theme of people trying to latch onto the rich. For example the Mckee's try to stay with Tom and Myrtle is doing the same as they believe that he can give them more and better street cred. ...read more.