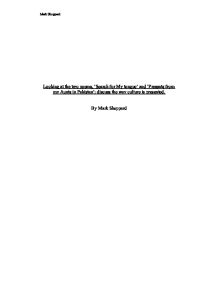 Looking at the two poems, 'Search for My tongue' and 'Presents from my Aunts in Pakistan'; discuss the way culture is presented.

Looking at the two poems, 'Search for My tongue' and 'Presents from my Aunts in Pakistan'; discuss the way culture is presented. By Mark Sheppard This essay is comparing two cultural poems, both written by people who have been taken from their 'home' culture, to another one, which is different. The poems-'Search for My tongue' and 'Presents from my Aunts in Pakistan'- are similar in some ways, but different in others. This essay will compare the two cultures, and the similarities and differences. Moniza Alvi wrote 'Presents from my Aunts in Pakistan'. She was born in Pakistan in 1954 but was moved to England when she was a young child. As Moniza grew up in England she was separated from her origins and never felt entirely at home. This is shown in the poem - 'half-English' - When Moniza revisited Pakistan she felt very English - her cultural background was affecting her more than she realised. I feel that Moniza wrote the poem to show others how different it is to change cultures, to half belong to one and half belong to another culture. She mentions in a BBC interview her poem is autobiographical and reflects her growing up. ...read more.

In the poem, Moniza portrays a bad image of her homeland. The pictures that she has are from the time of her youth, though they are not described in the poem, show where she was born. They are different from the newspaper reports she reads later in her life when Lahore is a war torn country, ' a fractured land'. She has pictures of Lahore in her mind; expectations of her country should be like to her. The environment she pictures shows a sexist environment, where the women and the men are separated. In the final stanza, we see that Moniza is isolated, left with the beggars and the sweeper girls, ' of no fixed nationality'. It seems that wherever she goes, there is no sense of home, no place that she can belong to. All throughout the poem, there is a strong sense of wanting to belong, but in no way being able to belong, a sense of disappointment and regret. 'Search for my Tongue' was written by Sujata Bhatt. She was born in India in 1956. Her family moved to America, where she was educated, and she now lives in Germany. ...read more.

The ideas of culture are strong in each one, both contributing to the ideal culture of the writers, one which everyone is welcome and can speak the same way, without feeling isolated. Both the poets have been taken from their original, home cultures and thrown into a harsh society to them, one that prevents them from fully finding themselves. Both the poems have strong imagery, which is vivid. An example of this is the phoenix reference of 'rising from the ashes' to be reborn, something both writers either wish to experience or have experienced. The main differences between the poems is the fact that in 'Search for my Tongue' the person recovers their culture, whilst the other person in ' Presents from my Aunts in Pakistan' loses their culture. I feel that 'Search for my Tongue' is a more metaphorical poem, a dream-like one which discusses the aspects of a lost language, a major part in any culture. I feel that it has more influence than 'Presents from my Aunts in Pakistan' as this is more literal and I don't fell has the depth of 'Search for my Tongue'. The culture in both of the poems has shown how moving from one country to another can have a major impact on people's lives and can affect them in a way which they do not understand or want. Mark Sheppard ...read more.