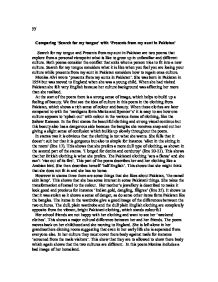 yy Comparing 'Search for my tongue' with 'Presents from my aunt in Pakistan' Search for my tongue and Presents from my aunt in Pakistan are two poems that explore from a personal viewpoint what is like to grow up in unfamiliar and different culture. Both poems consider the conflict that exits when a person tries to fit into a new culture. Search for my tongue considers what it is like when you feel you are losing your culture while presents from my aunt in Pakistan considers how to regain ones culture. Moniza Alvi wrote 'presents from my aunts in Pakistan'. She was born in Pakistan in 1954 but was moved to England when she was a young child. When she had visited Pakistan she felt very English because her culture background was affecting her more than she realised. At the start of the poem there is a strong sense of image, which helps to build up a feeling of beauty. We first see the idea of culture in this poem in the clothing from Pakistan, which shows a rich sense of colour and beauty. When these clothes are later compared to with the 'cardigans form Marks and Spencer's' it is easy to see how one culture appears to 'splash out' with colour in the various items of clothing, like the Salwar Kameez. ...read more.

She is left alone in her grandmothers dinning room suggesting that even in her early life she is separated from everyone else. In her culture they must cover there body against male for instance 'screened from the male visitors'. This show that they are to allowed to show there body which again shows that the two cultures are different. In this poem Moniza includes a bad image of her homeland. In the final stanza we see that Moniza is isolated, left with 'the beggars and the sweeper girls of no fixed nationality'. This shows that wherever she goes there is no sense of home and no place that she can belong to. All throughout the poem there is a strong sense of wanting to belong, but in no way being able to belong which is a sense of disappointment. On the other hand I would like to go on 'Search for my Tongue' which was written by Sujata Bhatt. She was born in India. Search for my tongue can be split into three parts. The first part is the lines 1 - 16, the second part is the Gujerati lines 17-30 and the last part is lines 31 to 38. The first part of the poem describes how she has lost her 'tongue' of her language. ...read more.

There are many similarities and difference between the poems. The ideas of culture are strong in each one, both contributing to the idea culture of the writers, one which everyone is welcome and can speak the same way, with felling scared. Both the poets have been taken from the original home cultures and thrown into a harsh society to them, one that prevents them fully finding themselves. I would also say that both poems have a strong imagery which is a vivid. An example of this is the phoenix reference of 'rising form the ashes' to be reborn, something both writers either wish to experience or have experienced. The main difference between the two poems is the fact that 'Search for my tongue' and the person recovers their culture, whilst the other person in 'Presents from my aunts in Pakistan' loses their culture. I feel that 'Search for my tongue' is a more metaphorical poem, a dream like some one which discusses the aspects of a lost language, a major part in any culture. I feel that it has more influence than 'Presents from my aunts' as this more literal and I don't feel has the depth of 'Search for my tongue'. The culture in both of the poems has shown how moving form one country to another can have a major impact of people's lives and can affect them in a way which they do not understand. ...read more.