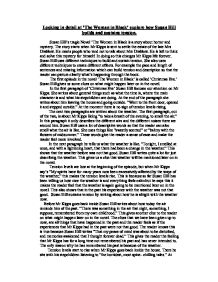 Looking in detail at &amp;#145;The Woman in Black&amp;#146;explore how Susan Hill builds and sustains tension.

Looking in detail at 'The Woman in Black' explore how Susan Hill builds and sustains tension. Susan Hill's tragic Novel 'The Women in Black is a story about horror and mystery. The story starts when Mr Kipps is sent to settle the estate of the late Mrs Drablow. He meets people who tend not to talk about Mrs Drablow. He is left to think and solve this mystery for himself. In doing so this changes Mr Kipps life forever. Susan Hill uses different techniques to build and sustain tension. She also uses different techniques to create different effects. For example the pace and length of sentences and missing information which can build tension and description so that the reader can picture clearly what's happening through the book. The first episode in the novel 'The Women in Black' is called 'Christmas Eve.' Susan Hill gives us some clues on what might happen later on in the novel. In the first paragraph of 'Christmas Eve' Susan Hill focuses our attention on Mr Kipps. She writes about general things such as what the time is, where the main character is and what his stepchildren are doing. At the end of the paragraph she writes about him leaving the house and going outside. "Went to the front door, opened it and stepped outside." At the moment there is no sign of tension levels rising. The next two paragraphs are written about the weather. The first paragraph, out of the two, is about Mr Kipps liking "to take a breath of the evening, to smell the air." ...read more.

When tension is taken place then sentences tend to get shorter and the pace faster. When there is no tension then the sentences are longer and slower which gives a feeling that everything feels as if it is being rushed. Another episode in this novel is "The Sound of a Pony and Trap." At the beginning Susan Hill focuses our attention on Mr Kipps. The tension level feels as if they are rising because Susan Hill writes about how quiet it is. "Outside, all was quiet, so that all I heard was the sound of my footsteps." So this means that it was so quiet that all he could hear was his own footsteps as he walked on the gravel. Susan Hill also writes about the women in black. In this case it seems that Mr Kipps has seen this woman in black before and has been quite afraid of her. "I glanced over my shoulder, half expecting to catch sight of the black figure of the woman following me." This gives the reader the feeling that because he is so alone, he keeps glancing back. This is because he might be afraid he might see the woman in black again. This again is a sign that tension levels are rising. In this episode Susan Hill mentions the weather again jut like she did in the episode "Christmas Eve." Susan Hill writes about the fog. This fits on with the events that are happening around Mr Kipps. ...read more.

Mr Daily tells Mr Kipps "you're a fool if you go on with it," meaning he doesn't want Mr Kipps to go back to Eel Marsh House. This makes the reader think why Mr Daily doesn't want Mr Kipps to go back to Eel Marsh House. This might be because there are other things that Mr Kipps doesn't know about the place. These things might cause tension to take place. In return Mr Kipps says "if you mean you think I should leave the job I've been sent here to do and turn tail and run," meaning Mr Kipps still wants to go back even from the experiences he has had. Mr Daily isn't telling himself what's wrong with the place which makes the reader think that he might want Mr Kipps to go back or he might have had experiences which he doesn't want to mention. "I'm not going to fill you up with a lot of women's tales." Whenever Mr Kipps tries to find out more about the house and the women he only gets "hints." When Mr Daily says, "You shouldn't go there alone," this makes the reader and Mr Kipps think why he shouldn't go on his own. Maybe, because bad things might happen. If there are two or more people then they wouldn't be afraid as much as if they were alone. Susan Hill uses Mr Kipps thoughts to break up tension so that the reader wonders what's going to happen next. This also makes the reader read on. Susan Hill uses the weather to symbolize the moods. Meaning when the weather starts to change, the moods of the character also start to change. ...read more.