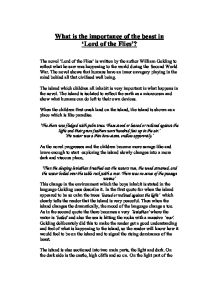 lord of flies essay - importance of the beast

What is the importance of the beast in 'Lord of the Flies'? The novel 'Lord of the Flies' is written by the author William Golding to reflect what he saw was happening to the world during the Second World War. The novel shows that humans have an inner savagery playing in the mind behind all that civilised well being. The island which children all inhabit is very important in what happens in the novel. The island is isolated to reflect the earth as a microcosm and show what humans can do left to their own devices. When the children first crash land on the island, the island is shown as a place which is like paradise. 'The shore was fledged with palm trees. These stood or leaned or reclined against the light and their green feathers were hundred feet up in the air.' 'the water was a thin bow-stave, endless apparently.' As the novel progresses and the children become more savage like and brave enough to start exploring the island slowly changes into a more dark and viscous place, 'Then the sleeping leviathan breathed out-the waters rose, the weed streamed, and the water boiled over the table rock with a roar. There was no sense of the passage waves;' This change in the environment which the boys inhabit is stated in the language Golding uses describe it. ...read more.

This soon consumes him with all evil. Piggy with his wide minded thoughts seems to want to find rational route to tackling the beast. Ralph is some where in between the other two as he doesn't want to have anything thing to do with the beast as he fears is. This way he tends to follow what Jack says on a few occasions. For these reasons Jack and his hunters cut away from Ralph, Piggy and Simon. As Jack persuades the littuns to come and follow him using their fears to persuade them. 'I've called an assembly,' said Jack, 'because of a lot of things. First-you know now, we've seen the beast. We crawled up. We were only a feet away.' 'Who thinks Ralph oughtn't to be chief?' In Jack calling an assembly of which he purposely called to take control of the island and instate himself as the chief. Shows that Jack had been overwhelmed by the dark and savage side of him, as he was very much willing to have rules and abide by them at first and now he is very strongly trying to break in order to let his savageness go free. Jack Had found out what the children fear most which the Beast. ...read more.

'suddenly Jack bounded up the tribe began screaming wildly.' I can therefore conclude that the beast is very important in this novel. It contributes to the group splitting up. First of all it splits them into the 'bigguns' and 'littuns' from when the little boy says he saw the beastie. Then separates Jack from Ralph's way of thinking. This beastie as they call it manipulates them into thinking that there is something on the island which is after them. This makes the children even more scared and fearful. They start to think evil and lose touch of the rules in the so called civil world they left. When one of them does find out what the beast really is which is the fear and evil which every man on the planet contains even to this day, he faces his death straight after. If little children can do this to themselves then imagine what adults can do. Adults are no better, if everyone was so civilised then why have there been so many wars in the history on the planet? These days' world leaders use fear of evil to justify war, which in real fact is still immoral savagery. Killing a human just to save another is no way civil. If this is happening right now how long can we go on like this? Sooner or later this beast will take over the world wouldn't it? It's only a matter of time. ...read more.