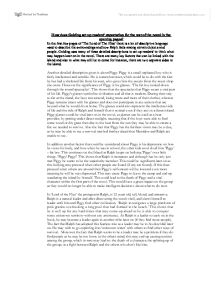 Lord Of The Flies - How Golding sets up readers expectations

How does Golding set up readers' expectation for the rest of the novel in the opening pages? In the first few pages of 'The Lord of The Flies' there is a lot of descriptive language used to describe the surroundings and how Ralph feels among certain objects and people. Golding uses many of these detailed descriptions to set up readers' to think what may happen later on in the novel. There are many key factors that can be linked with the island and also to what may still be to come for instance, there are two separate sides to the island. Another detailed description given is about Piggy. Piggy is a small orphaned boy who is fairly intellectual and sensible. He is somewhat stout, which could be to do with the fact he has had a sheltered life from his aunt, who gives him the sweets from the sweet shop she owns. However the significance of Piggy is his glasses. 'The fat boy looked down through the round spectacles'. This shows that the spectacles that Piggy wears a vital part of his life. Piggy's glasses symbolise civilisation and all that is modern. During their stay so far at the island, the boys run around, losing more and more of their clothes, whereas Piggy ...read more.

In 'Lord of the Flies' the protagonist Ralph, is 12 years old, tall, blond, and attractive. Ralph is a natural leader and after discovering the conch shell, and elects himself as leader until him and Piggy find other civilisation. 'Ralph investigates a large platform of pink granite overlooking a long pool that had formed in the beach.' This shows that he is well up for any hard times that may come up ahead as he is able to conquer some unknown territory without any assistance. As Ralph is a leader so early on in the book, he may become a leader again in another tribe later on (if they find more people). The fact that Ralph has adopted this fearless role as a leader may be to his downfall later on. He may wish to go exploring into 'unknown water' with others to find other ways of survival. Moreover the fact that Ralph wants to be a leader may be a problem if they do find people as he may be too bossy in the others mind, this may end up causing tension among the group, which in turn may lead to: the death of a character; the splitting up of the group; or a fight between Ralph and the others who don't like him. ...read more.

Or it may also be bad because of the fact one can not live off fruit alone, so this may lead to the group splitting up again and having to fight one another for what food they can have. Or maybe even resort to cannibalism. This fact could also be linked in with Ralph's leadership, as if there is only fruit then they will need to go out and hunt for animals which Ralph as a leader will be proud and responsible to take part in. However again if they do find an animal it may be viscous, and end up badly injuring or killing a member of the tribe. As shown Golding has created a great response to the opening few pages of the novel. There are many different ways in which people may interpret the following part of the novel from what has already been read. This is mainly due to the detailed description given and also due to the fact that each description can have a double meaning for instance: 'Long, scar smashed', this could be taken as there is an evil essence on the Island by one person, but by another it may be seen as, there is a divide in the community meaning someone may end up been hurt or dead. ...read more.

This is a very detailed answer that adheres to the steer of the question consistently for the duration of the answer. There is an excellent structure regarding the first chapter of William Golding's 'Lord of the Flies', commenting on a ...

This is a very detailed answer that adheres to the steer of the question consistently for the duration of the answer. There is an excellent structure regarding the first chapter of William Golding's 'Lord of the Flies', commenting on a wide range of possibilities the are conjured up in the readers' minds after finishing the first chapter. The danger with this question is that candidates might venture into explaining what actually happens past the first chapter, but this is where this candidates excels - they adapt the viewpoint of someone who knows very little about the book and uses their imagination to explain what they think could happen given the information that Golding writes into the chapter.

The Level of Analysis is extremely good. There is a number of different scenarios proposed by the candidate with regard to what Golding is trying to achieve with his descriptions of Ralph and Piggy, never once confirming what actually happens later on, but always raising the question as to whether something or something else will happen. This is effective as it shows examiners that the candidate has successfully adopted the perspective of someone who has not read past the first chapter.
The description of Piggy is rich with possibilities of foreshadowing the later events of the novel, so they candidate has done well to focus on this section and there identification of the relevance of Piggy's glasses shows a very astute perception of Golding's allegories. Though personally, I would argue that mentioning that the glasses represent "civilisation" is slightly misconstrued with the symbolism of the conch shell. Piggy glasses instead symbolise rationality and sensibility - with them, his eyesight is perfect and provides wisdom and intelligence (which is proven in his warnings to the others about poisoned fruit).

The Quality of Written Communication is also excellent. This answer was clearly written by a confident writer has knows how to use the English language and all it's properties required to answer this question with a style wholly indicative of someone operating at a solid A* grade. There is a high level of excellence in grammar, spelling and punctuation.