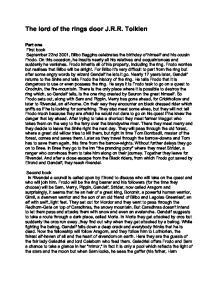 Lord of the Rings book report. Plot outline and themes.

The lord of the rings door J.R.R. Tolkien Part one First book September 22nd 3001, Bilbo Baggins celebrates the birthday of himself and his cousin Frodo. On this occasion, he insults nearly all his relatives and acquaintances and suddenly he vanishes. Frodo inherits all of his property, including the ring. Frodo worries but realises that Bilbo will be alright. For Bilbo it's very difficult to part from the ring but after some angry words by wizard Gandalf he lets it go. Nearly 17 years later, Gandalf returns to the Shire and tells Frodo the history of the ring. He tells Frodo that it is dangerous to use or even possess the ring. He says it is Frodo task to go on a quest to Orodruin, the fire-mountain. There is the only place where it is possible to destroy the ring which, so Gandalf tells, is the one ring created by Sauron the great himself. So Frodo sets out, along with Sam and Pippin, Merry has gone ahead, for Crickhollow and later to Rivendel, an elf-home. On their way they encounter an black dressed rider which sniffs as if he is looking for something. They also meet some elves, but they will not tell Frodo much because they are afraid he would not dare to go on his quest if he knew the danger that lay ahead. After trying to take a shortcut they meet farmer Maggot who takes them on the way to the ferry over the brandywine river. There they meet merry and they decide to leave the Shire right the next day. They will pass through the old forest, where a great old willow tries to kill them, but right in time Tom Bombadil, master of the forest, comes and saves them. Later as they travel through the barrow-downs and Tom has to save them again, this time from the barrow-wights. ...read more.

They ride to the fords of the Isen where they hoped to meet Th�oden's men under command of Erkenbrand holding back the hosts of Saruman. They urge them to come back to helm's deep, a strong fortress which has never been conquered, they go there too. When they get there, they're attacked by orcs, but there's no Erkenbrand. All fear that the orcs got him. They manage to hold them back until dawn, and then king Th�oden decides to attack for the last time, and just when they ride, Gandalf returns with Erkenbrand just in time. The orcs flee into the nearby forest and they all die there. They ride to Isengard where they see ents, and Merry and Pippin! Merry and Pippin are very happy to see Aragorn, Gimli and Legolas again, but they're amazed to see Gandalf for they thought he was dead. They tell their story to Gimli, Aragorn, and Legolas, about how they got there and how the ents destroyed Isengard but not Orthanc, which contains a greater magic then Saruman's. And they get back their swords the orcs took from them. Gandalf, who talked to Treebeard for a while goes into Orthanc with the king, Legolas, Gimli, Aragorn and a couple of riders from Rohan. In Orthanc they see Saruman who tries to persuade the king, by using his enchanting voice, to make allies with him, but the king knows his tricks and refuses. Then Saruman tries to enchant Gandalf but Gandalf breaks his wand and casts him from the order and from the council of wizards. When they leave, Wormtongue tries to throw a stone at Gandalf, or at Saruman, nobody really knows. The stone rolls down the stairs of Orthanc and almost into the river, but Pippin picks it up and gives it to Gandalf. But at night Pippin can't sleep because he has to think of the stone, which is called palantir, and decides to go and take a look. ...read more.

At the beginning of the story he is an ordinary hobbit fond of and used to a lot of comfort and extensive meals. Although he is more of an adventurer than most of his kind, he would have never taken part in this adventure, had he known what it entailed. He is of a wealthy and respectable family, the Baginses. As the story proceeds he becomes more and more a brave little hobbit. He is of gentle character and very loyal to his friends. Gandalf the Wizard is also a very important character, his full name is Gandalf the Grey, or as the elves call him: Mithrandir. He is an old and wise man but also very mysterious and closed to others. He tends to speak in riddles and he is a solemn character who will not soon indulge in small talk like the hobbits do, but he has humor and he is very fond of the hobbits and their particular ways. The others all have the deepest respect for him and he is the leader of the company. Sam, as well as Merry and Pippin kind of follow Frodo in his experiences and they too grow more and more adventurous as the story goes on. Legolas remains almost the same person he is the entire book, he is smart, light on his feet and never jumps to conclusions, though his opinion about dwarfs changes a bit. Gimli is the opposite of Legolas, he is a dwarf, very short tempered and he too remains that way, it's only his opinion of elves that changes Minor charachters Unfortunately there are too many of these to try and explain them. Theme This story is mainly about courage, I think, the courage of Frodo, the little hobbit. It is also about not underestimating the little things, as Sauron did with the hobbits. And finally it is about the fight between good and evil. Perspective I think the writer looks with a medieval perspective, he does this very well, when you read it you have. ...read more.