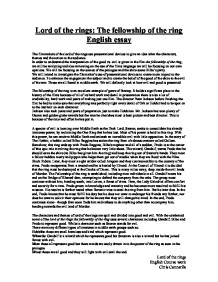 Lord of the rings: The fellowship of the ring English essay The filmmakers of the lord of the rings use presentational devices to give an idea what the characters, themes and the action to the audience. In order to understand the interpretation of the good vs. evil is given in the film the fellowship of the ring, we will be analyzing and also reviewing on the use of the films language we will be focusing on our own opinions. We will be focusing on the scenes of the prologue and the shire scene Bilbo's party. We will intend to investigate the filmmaker's use of presentational devices to create more impact to the audience. To enhance the engagement the subject and to create the belief of the good of the shire to the evil of the war. These are all found in middle earth. We will defiantly look at how evil and good is presented The fellowship of the ring is an excellent example of genre of fantasy. It holds a significant place in the history of the films because of all of its hard work and detail in presentation there is also a lot of creditability, hard work and years of making just one film. The director Peter Jackson before finishing the film he had to make sure that everything was perfectly right every detail of Ork or Hobbit had to be spot on to the last hair on each character. Jackson also took years and years of preparation just to make Hobbiton. ...read more.

Sound is a very important facture in the lord of the rings in the prologue the most powerful force is the sound this impresses us it catches our breath before the picture does. The most important aspect in sound is silence this accupanny's the opening scene this steadily goes into strong and powerful music for the battle. Also used well throughout the whole film are the effects of natural sound. Percussion and wind instruments are used for the strong scenes such as the war but choir and strings are used for the gentle scenes, such as Gollum staring at the ring. Also used to an extent is the strong and silent voice of the narrator. Sound in the prologue seems to be the strongest cinema catcher. The sound in the shire is fairly softer to the prologue this is because the shire has no harse and violent times but to most of its affect it has proven to be just as affective. The shire sound has proven to use less percussion and more natural sounds as there is more speech and little characters to focus on, but in the shire the piano seems to be played as to a sound of trickery this is shown when Gandalf is searching and merry and pippin are being mischievous, the also in the shire the is a mesh of music rather than one particular instrument, for example at the end of the shire scene were Bilbo says 'so he lived happily ever after' I can say the fellowship of the ring works very well on the option of sound. ...read more.

But in the prologue what it has that the shire has not got is the jump cuts because the prologue has to cover a longer period of time. But there is good use of editing all round in both parts. Lord of the Rings looks nothing less than spectacular. What is even more impressive is the fact that director Peter Jackson decided to film all three of the books at one time, no easy task by any stretch of the imagination. He uses all the technology and wizardry available to filmmakers today and thrusts the audience deep within the treacherous and exciting Middle-earth. From the diminutive hobbits, to the Elven city Rivendell to the dark Mines of Moira, it's all there. The amount of talent involved in creating the film--the conceptual artistry, the production design, the costumes--should be recognized come Oscar time. The pacing of the movie is excellent, with enough down time and heartfelt, if sometimes stilted, speeches to counteract the incredible action sequences. You hardly notice the three hours passing by, and it leaves you at the end wanting the quest to continue. The only one deterring fact is that the film really is for its die-hard fans. Certainly in the literary world, Tolkien's story is the mother of all epic fantasies, and Jackson has remained faithful to the material. In that, the movie doesn't necessarily have the universal appeal of, say, a Harry Potter. Nonetheless, Rings is a breathtaking piece of filmmaking. If you are a true-blue Rings follower, or even if you enjoy a good epic fantasy quest, the film has it all and will certainly not disappoint you. Lord of the rings English Course work Chris Cannarile ...read more.