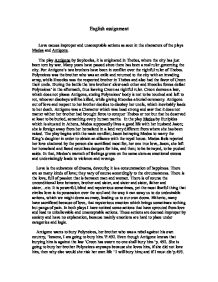 Love causes improper and unacceptable actions as seen in the characters of the plays Medea and Antigone.

English assignment Love causes improper and unacceptable actions as seen in the characters of the plays Medea and Antigone. The play Antigone by Sophocles, it is originated in Thebes, where the city has just been torn by war. Many years have passed since there has been a real ruler governing the city. For Antigone's two brothers have been in conflict over the rightful ruler of Thebes. Polyneices was the brother who was an exile and returned to the city with an invading army, while Eteocles was the respected brother in Thebes and also had the favor of Creon their uncle. During the battle the two brothers' slew each other and Eteocles forces defeat Polyneices' in the aftermath, thus leaving Creon as rightful ruler. Creon decrees a law, which does not please Antigone, stating Polyneices' body is not to be touched and left to rot, whoever disobeys will be killed, while giving Eteocles a burial ceremony. Antigone out of love and respect to her brother decides to disobey her uncle, which inevitably leads to her death. Antigone was a Character which was head strong and saw that it does not matter wither her brother had brought force to conquer Thebes or not but that he deserved at least to be buried, something every human merits. ...read more.

Antigone does bury Polyneices 'Not buried really, but as if they'd covered it' giving him a symbolic burial, which is almost good enough. This action has put Antigone in mortal danger, it is not really an unacceptable action in Antigone's point of view, but it is one in the since that she broke the law and she put her own life in danger doing so, because really if she did not love her brother she would have never done these things. After Antigone is caught and is sent to death Haimon Creon's son tries to save Antigone his bride to be, but fails due to the stubbornness of his father. Antigone is sent to be put in a cave to die, Creon later on goes back on his punishment, but he is too late. Antigone is dead. Haimon loves Antigone so much that he cant bare the thought of living without her so he takes out his sword and kills himself 'Haimon is dead; and the hand that killed him is his own'p520. This is the power of love and proof that it can make us do harmful things, things we would not do if we were not in love. ...read more.

The fetal flaw that lead to most of the deaths in both plays was the letting go, the falling into the depth of the never ending cycle of love and believing it would last, by the characters. A good quote for love from the play Antigone explained love quite clearly was 'Love, unconquerable Waster of rich men, keeper of warm lights and all-night vigil in soft face of girl: sea-wanderer, forest-visitor even pure immortals cannot escape you, and man mortal man, in his one day dusk, trembles before your glory. Surly you swerve ruin the just man's consenting heart, as here you have made bright anger strike between father and son and none has conquered but love! A girls glance working the will of heaven: pleasure to her alone who mocks us, merciless Aphrodite.'p.511. As we can see how love can be both bliss and tragedy. For in that vast sanctuary of ecstasy in a world of dreamed up love, the result can be a never ending void of hatred if that love is not true. It is a strong emotion that can have fetal results if not taken with the care and readiness it deserves. ...read more.