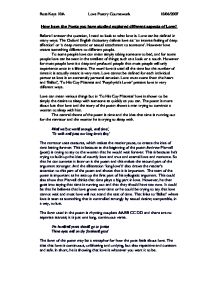 How have the Poets you have studied explored different aspects of Love? Before I answer the question, I need to look at what love is. Love can be defined in many ways. The Oxford English dictionary defines love as: 'an intense feeling of deep affection' or 'a deep romantic or sexual attachment to someone'. However love means something different to different people. To some people love can mean simply taking someone to bed, and for some people love can be seen in the smallest of things; such as a look or a touch. However for most people love is a deep and profound people that most people will only experience once in a lifetime. The word love is used all the time but the number of times it is actually meant is very rare. Love cannot be defined for each individual person as love is an extremely personal emotion. Love must come from the heart and 'Ballad', 'To His Coy Mistress and 'Porphyria's Lover' present love in very different ways. Love can mean various things but in 'To His Coy Mistress' love is shown to be simply the desire to sleep with someone as quickly as you can. The poem is more about lust than love and the story of the poem shows a man trying to convince a woman to sleep with him. The central theme of the poem is time and the idea that time is running out for the narrator and the woman he is trying to sleep with. ...read more.

wishes that she had never slept with the Shepherd and wants her virginity back. 'I wish I was a maid again: A maid again I cannot be' The poem starts with the woman sleeping with the Shepherd; the Shepherd leaves her and the woman now wishes that she had never slept with him. The poem shows the effect that this ordeal had on the woman and the language used reflects on her different stages of what could be portrayed as madness, ending with her killing her child and herself. Her virginity is seen as something very precious and she even goes as far as to say that he has her heart. The use of imagery in the form of a metaphor shows that this particular area of the poem is very important and the poet could be trying to show that he believes that virginity is just as important as love, and therefore the heart, itself. The tone of the poem is one of regret and remorse showing the woman's regret for sleeping with the Shepherd. 'I wish my sorrows all away, My soul with God, my body clay.' The quote shows that the woman regrets what she has done so much that she wishes she was dead. The language used throughout the whole poem shows that she is wishing that she could change what she has done. The use of the supernatural brings a new perspective to the poem and shows that perhaps the poet was a spiritual man the believed in fate and spiritual love. ...read more.

This idea is strengthened further at the end of the poem, when the narrator says 'And yet God has not said a word!' this shows that maybe God will not condemn the man as his love to Porphyria was blessed and sacred. The poet could be trying to say that love itself is sacred and blessed. The form of the poem is in the form of a limerick i.e. ABABB. As well as this the poem is not split into stanzas, it is kept in one big stanza, like 'To His Coy Mistress'. 'The rain set early in tonight, The sullen wind was soon awake, It tore the elm-tops down for spite, and did its worst to vex the lake: I listened with heart fit to break' The form of the poem could be seen as showing the narrators continuous association with Porphyria's disease and how eventually it gets the better of him and he kills someone. It could also be seen to represent the poets ideas on love i.e. that it is continuous, unfaltering and constant. To conclude, I believe that all the different poets have different ideas about love. From Robert Browning that possibly thinks that love is special, spiritual and can control us. To Andrew Marvell and the author of 'Ballad' who think that love is not as much spiritual as physical. This links back to what I said at the start of the poem that love is different for every person. To quote a friend 'Love is whatever you want it to be.' ?? ?? ?? ?? Ross Keys 10A Love Poetry Coursework 18/06/2007 ...read more.