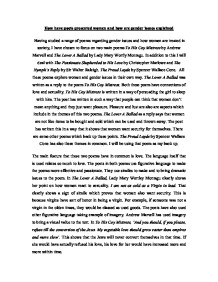 Lust and pleasure as a theme. To His Coy Mistress, The Lover A Ballad, The Passionate Shepherd

How have poets presented women and how are gender issues explained Having studied a range of poems regarding gender issues and how women are treated in society, I have chosen to focus on two main poems To His Coy Mistress by Andrew Marvell and The Lover A Ballad by Lady Mary Wortly Montagu. In addition to this I will deal with The Passionate Shepherded to His Love by Christopher Marlowe and The Nymph's Reply by Sir Walter Raleigh. The Proud Layde by Spencer Wallace Cone. All these poems explore women and gender issues in their own way. The Lover A Ballad was written as a reply to the poem To His Coy Mistress. Both these poem have connections of love and sexuality. To His Coy Mistress is written in a way of persuading the girl to sleep with him. ...read more.

They use similes to make and to bring dramatic issues to the poem. In The Lover A Ballad, Lady Mary Wortley Montagu clearly shows her point on how women react to sexuality. I am not as cold as a Virgin in lead. That clearly shows a sign of simile which proves that women also want security. This is because virgins have sort of honor in being a virgin. For example, if someone was not a virgin in the olden times, they would be classed as used goods. The poets have also used other figurative language taking example of imagery. Andrew Marvell has used imagery to bring a visual value to the text. In To His Coy Mistress, 'And you should, if you please, refuse till the conversion of the Jews. ...read more.

That quote tries to say that, if the entire Shepherd's in this world spoke the truth, then those things that he had offered her would move her and make her fall in love with him. But she has not made the move because she is curious that whatever he said could be false. All five poems including my back up poem has lust and pleasure as a theme. To His Coy Mistress, The Lover A Ballad, The Passionate Shepherd to his love, The Nymph's Reply and The Proud Layde. In The Proud Layde, The rose of the summer slept on her cheek. As we can see the word rose appears again. This word was used because the rose is a symbol of sex. The whole idea of the rose on her cheek means that she was blushing, combined with the image of sex, it shows that she was blushing sexually. By Joey ...read more.