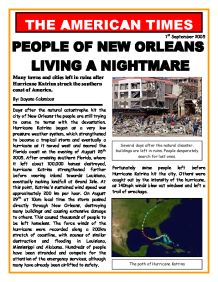 Many towns and cities left in ruins after Hurricane Katrina struck the southern coast of America.

Many towns and cities left in ruins after Hurricane Katrina struck the southern coast of America. By: Dayana Calambas Days after the natural catastrophe hit the city of New Orleans the people are still trying to come to terms with the devastation. Hurricane Katrina began as a very low pressure weather system, which strengthened to become a tropical storm and eventually a hurricane as it moved west and neared the Florida coast on the evening of August 25th 2005. After crossing southern Florida, where it left about 100,000 homes destroyed, hurricane Katrina strengthened further before veering inland towards Louisiana, eventually making landfall at Grand Isle. At this point, Katrina's sustained wind speed was approximately 200 km per hour. On August 29th at 10am local time the storm passed directly through New Orleans, destroying many buildings and causing extensive damage to others. This caused thousands of people to be left homeless. ...read more.

As a result wind speeds started to increase as more air was sucked into the low-pressure centre. It took several days for the depression to grow into a fully formed hurricane. Ultimately, Hurricane Katrina has led to many social effects that are complex and yet to be fully determined. Many lives were lost, while many more were disrupted. This terrible event has left thousands without access to their homes or jobs, has separated people from their loved ones, and has inflicted both physical and mental distress on those who suffered through the disastrous event and its consequences.New Orleans Mayor Ray Nagin has said "A definitive death count has been impossible while parts of the city remain unreachable. With the evacuation of thousands of survivors, New Orleans is left resembling a ghost town. Rescue teams continue to search for survivors, and recovery of bodies has also begun. Any number of people could still be found dead in swamped homes and shelters." ...read more.

"The city has no clean water, no sewage system, no electricity, and no real communications. Bodies are still being recovered, found floating in the floods. We are worried about a cholera epidemic. Even the police are without effective communications," New Orleans resident Greg Henderson stated. Moreover the authorities are urging people who have chosen to remain in their homes to leave because the city is uninhabitable. Jessica Moore a victim of Hurricane Katrina says "We got dead bodies sitting next to us for days. I feel like I am going to die. People are going to kill you for water." Overall we must agree that a valuable lesson is learnt from this Natural catastrophic disaster that Hurricanes are definitely out of our control. We must rely on anticipated warnings in order for the authorities to take action immediately such as evacuating more people to prevent fewer deaths. Unlike economic damage, human suffering is extremely difficult to quantify, but it is clear that Hurricane Katrina has caused more immediate anguish than any other natural disaster to ever hit America. ...read more.