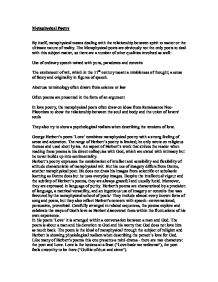 Metaphysical Poetry By itself, metaphysical means dealing with the relationship between spirit to matter or the ultimate nature of reality. The Metaphysical poets are obviously not the only poets to deal with this subject matter, so there are a number of other qualities involved as well: Use of ordinary speech mixed with puns, paradoxes and conceits The excitement of wit, which in the 17th century meant a nimbleness of thought; a sense of fancy and originality in figures of speech. Abstruse terminology often drawn from science or law Often poems are presented in the form of an argument In love poetry, the metaphysical poets often draw on ideas from Renaissance Neo-Platonism to show the relationship between the soul and body and the union of lovers' souls They also try to show a psychological realism when describing the tensions of love. ...read more.

Despite the intellectual vigour and the subtlety of Herbert's poems, they are always graceful and usually lucid. Moreover, they are expressed in language of purity. Herbert's poems are characterized by a precision of language, a metrical versatility, and an ingenious use of imagery or conceits that was favoured by the metaphysical school of poets.3 They include almost every known form of song and poem, but they also reflect Herbert's concern with speech--conversational, persuasive, proverbial. Carefully arranged in related sequences, the poems explore and celebrate the ways of God's love as Herbert discovered them within the fluctuations of his own experience. In his poem 'Love' it is arranged within a conversation between a man and God. ...read more.

A particularly good example is when the poet says he can't even look on God, but Love counters: "Who made the eyes but I?". He even has an argument for that! - "Truth, Lord, but I have marr'd them". Love/God doesn't deny that the poet is sinful, but, in a reference to redemption by Christ says: "know you not ... who bore the blame?". The poet then agrees to come in, but only in a serving role ("then I will serve"), but Love wants him to be a full guest ("You must sit down ... and taste my meat"). Finally the poet is won over - "So I did sit and eat". ...read more.