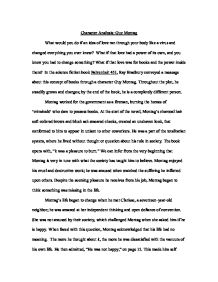 Character Analysis: Guy Montag What would you do if an idea of love ran through your body like a virus and changed everything you ever knew? What if that love had a power of its own, and you knew you had to change something? What if that love was for books and the power inside them? In the science fiction book Fahrenheit 451, Ray Bradbury conveyed a message about this concept of books through a character Guy Montag. Throughout the plot, he steadily grows and changes; by the end of the book, he is a completely different person. Montag worked for the government as a fireman, burning the homes of "criminals" who dare to possess books. At the start of the novel, Montag's charcoal hair soft-colored brows and blush ash smeared checks, created an unshaven look, that conformed to him to appear in unison to other coworkers. He was a part of the totalitarian system, where he lived without thought or question about his role in society. The book opens with, "it was a pleasure to burn." We can infer from the very beginning that Montag is very in tune with what the society has taught him to believe. ...read more.

When neither Mildred nor Montag remembered where they met the first time, Montag then realized that was unhappy in his relationship with his wife, Mildred. For the first time this showed that Montag had an external conflict with his wife. He became very frustrated, because his eyes had been opened. He didn't like this fact about his marriage. Mildred was unwilling to deal with reality and instead chose to immerse herself in an obsession with her tranquilizers, the virtual world provided by her television and radio. Montag tried to reveal his independent thoughts to his wife, but she was incapable of understanding them. When Montag was unable to discuss his ideas at home, in total frustration, turned to Faber, an old English professor, for friendship and advice. In this moment, Montag proved to the audience for the first time that he is a dynamic character, who caused change for others. He wanted to change the world by having the will to reintroduce books into society; and the will to plant books in the homes of firemen and in the firehouses themselves. Faber was usually shy and very to himself and Montag transformed him into someone who was willing to move forward Montag's goal of having books back in their society. ...read more.

He used the symbol of fire to describe much of what happens to Montag. The fire showed how things are destroyed and have to be rebuilt; this is what Montag had to do when he had to start over with a different outlook on life. Bradbury also created the phoenix, which appeared often in the novel, showing how Montag's life is finally purified and reborn by fire. During the course of the plot, Montag evolved from an apathetic, conformist fireman, the very essence of socially acceptable stagnancy, to a new man filled with strong ideals and beliefs. He had a new purpose in life, to preserve books and the knowledge they contain. At the end of the novel, he hoped for the future and no longer dreads the present. We must realize from this book that we have the power within ourselves to do whatever we set our mind to. More importantly, we must remember that there were others before us, who made the same mistakes as us. We can relate to Montag in many ways and the power of that is what we can learn not only from his mistakes, but gain from what he did right. Nobody gains the same thing from it. This is the most important thing that Montag can teach us, and that is what Bradbury was teaching us. ...read more.