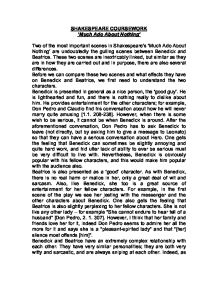 'Much Ado About Nothing'.

SHAKESPEARE COURSEWORK 'Much Ado About Nothing' Two of the most important scenes in Shakespeare's 'Much Ado About Nothing' are undoubtedly the gulling scenes between Benedick and Beatrice. These two scenes are inextricably linked, but similar as they are in how they are carried out and in purpose, there are also several differences. Before we can compare these two scenes and what effects they have on Benedick and Beatrice, we first need to understand the two characters. Benedick is presented in general as a nice person, the 'good guy'. He is lighthearted and fun, and there is nothing really to dislike about him. He provides entertainment for the other characters; for example, Don Pedro and Claudio find his conversation about how he will never marry quite amusing [1.1. 208-238]. However, when there is some wish to be serious, it cannot be when Benedick is around. After the aforementioned conversation, Don Pedro has to ask Benedick to leave (not directly, but by asking him to give a message to Leonato) so that they can have a serious conversation about Hero. One gets the feeling that Benedick can sometimes be slightly annoying and quite hard work, and hid utter lack of ability to ever be serious must be very difficult to live with. ...read more.

Then the listener is told why the other will not speak of their love. In both cases this is because they are afraid that the other will "make but a sport of it" [2. 3. 148]. This explains to Benedick why Beatrice is still being as nasty as ever to him, because "she will die ere she make her love known" [2. 3. 165-6]. Then, reverse psychology is used on Benedick/Beatrice. Firstly all of the listener's bad faults are listed, for example, "For the man...hath a contemptible spirit" [2. 3. 170], or "Nature never framed a woman's heart of prouder stuff than that of Beatrice" [3. 1. 49-50]. This is followed by a list of all the good qualities of the other party, for example, "She's an excellent sweet lady, and...she is virtuous" [2. 3. 150-152], or "He is the only man of Italy" [3. 1. 92]. The overall effect of this makes Benedick and Beatrice determined to love the other and to make the other love them back. At the end of both scenes, both Benedick and Beatrice vow that the love must be requited. They are both contrary characters and so had to be tricked by reverse psychology - to do what they would not (ordinarily) ...read more.

There were hints of something between Benedick and Beatrice before, for example when Beatrice says that Benedick once lent her his heart and she gave him use for it [2. 1. 245-6]. It is known that they are obviously old acquaintances anyway, because Beatrice says, "I know you of old" [1. 1. 126], which also implies that she knows him well. If this is so, and they were in love before, then perhaps they still felt something for each other but kept it secret, possibly because, like it is said in the gulling scenes, they were afraid the other would laugh at them, or for fear that the other didn't feel the same way. Maybe when they overheard what they thought was how the other felt, they admitted to themselves that they really did love the other. This would mean that they did not suddenly 'realise' all in a moment that they loved the other one, but that they had felt like that all along. Perhaps Shakespeare meant these scenes to prove that Benedick and Beatrice were in love all along. I think that although there are differences between the two gulling scenes, they are very similar in purpose and how they are carried out, and even the people they are carried out on. They may differ slightly in some ways, but they had the same results - making two reluctant people realise they love each other. ...read more.