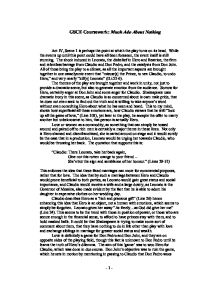 GSCE Coursework: Much Ado About Nothing Act IV, Scene 1 is perhaps the point at which the play turns on its head. While the events up until this point could have all been foreseen, the event itself is still stunning. The shock induced in Leonato, the disbelief in Hero and Beatrice, the firm and relentless barrage from Claudio and Don Pedro, and the catalysts from Don John. All of these bring the play to a climax, as all the important aspects are brought together in one cataclysmic event that "misuse[s] the Prince, to vex Claudio, to undo Hero," and very nearly "kill[s] Leonato" (II.i.25-6). The themes of the play are brought together and work in unity, not just to provide a dramatic scene, but also to generate emotion from the audience. Sorrow for Hero, certainly anger at Don John and some anger for Claudio. Shakespeare uses dramatic irony in this scene, as Claudio is so concerned about is own male pride, that he does not even seek to find out the truth and is willing to take anyone's word without even consulting Hero about what he has seen and heard. This to my mind, shows how superficial all these emotions are, how Claudio swears that he will "lock up all the gates of love," (Line 103), yet later in the play, he accepts the offer to marry another but unbeknownst to him, that person is actually Hero. ...read more.

The proposed marriage is stayed a week, and Don John, as the 'sneaky' character in the play, is bound to continue his plot of causing as much unrest as possible, and as Francis Bacon stated "...bastards are envious", and it appears to me, as it would the audience, that Don John harbours resent towards his brother and his companion. Don Pedro clearly views himself as the God of love, and compares himself to Cupid, challenging him and he even goes as far as to say that he will "undertake one of Hercules' labours", and this act of self-deification is one of the reasons why Don Pedro can be viewed as slightly immature, and reinforces the idea that his opinion on love is that it is nothing serious, and can be thrown around the place without it having any significant meaning. Don John however is not the only trickster in the play. In fact, it seems that almost every character is involved in some trickery of some sort, be it with good or bad intentions. Don John throws comments into the melee that is the wedding scene, making worse what is already such a damning scene. His plot to cause as much grief and misery as possible seems to be well in effect, as no one seems to be concerned with finding out the truth, but more with their own personal pride and honour. ...read more.

Juliet replies with: "O swear not by the moon, the inconstant moon, That monthly changes in her circled orb, Lest thy love prove likewise variable" (II.i.152-4) It is interesting to see how the moon seems to hold no real value, because of its inconsistency, and Claudio sees Hero in the same light. In conclusion, careful construction of each scene evokes reactions from the audience. It seems to me, that one would feel deeply for Hero, as she has been denounced, in public and it is made all the worse that, not only is she dressed in more expensive clothes than the Duchess of Milan, the entire event happens on the day of her wedding, in front of the entire household on Leonato. I think that this action of Claudio's is unjustified and because of is immaturity, he does not seek to find the truth, and because of this, Don John's machiavellian plan goes as predicted, and 'Hero is undone', 'The Prince is misused', 'Claudio is vexed' and Leonato does seek to kill himself under the shame that has been brought upon him. This egotistical and patriarchal display evidently the true feelings of Leonato, and this in itself is ironic, as his true emotions some to light only when lies and slander are introduced into what would usually be a perfectly happy household with no malcontent or deceit. In fact, it is not until Don Pedro and his Bastard brother arrive that the house undergoes a significant change in its emotional and physical makeup. ?? ?? ?? ?? - 1 - ...read more.