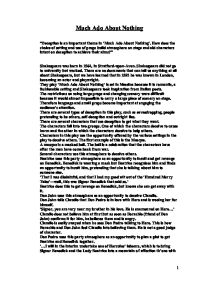 Much Ado About Nothing "Deception is an important theme in 'Much Ado About Nothing'. How does the choice of setting and use of props build atmosphere on stage and aid characters intent on deception to achieve their aims?" Shakespeare was born in 1564, in Stratford-upon-Avon. Shakespeare did not go to university but worked. There are no documents that can tell us anything at all about Shakespeare, but we have learned that in 1592 he was known in London, becoming an actor and playwright. They play 'Much Ado About Nothing' is set in Messina because it is romantic, a fashionable setting and Shakespeare took inspiration from Italian poets. The restrictions on using large props and changing scenery were difficult because it would almost impossible to carry a large piece of scenery on stage. Therefore language and small props become important at engaging the audience's attention. There are several types of deception in this play, such as eavesdropping, people pretending to be others, self-deception and outright lies. There are several characters that use deception to get what they want. The characters fall into two groups. One of which the characters deceive to cause harm and the other in which the characters deceive to help others. Characters in this play use the opportunity offered by the various settings in the play to deceive others. The first example of this is the Masque. ...read more.

'He doth deserve as much as may be yielded to a man, but nature never framed a woman's heart of prouder stuff than that of Beatrice.' They say her that Benedick deserves to be happily married but Beatrice is proud and unapproachable. She is sarcastic about everything and can't love anyone as much as herself. This deceives Beatrice into believing them because she will realise that this has kept Benedick away from her. When Hero and Ursula mix lies and truths together it makes the plot more believable. 'O, do not your cousin such a wrong. She cannot be so much without true judgement, having so swift and excellent a wit as she is priz'd to have, as to refuse so rare a gentleman as Signor Benedick...he is the only man of Italy, always excepted my dear Claudio.' Hero and Ursula say that they can't believe Beatrice would refuse Benedick as everyone says she has a good judge of character, and that Benedick has the reputation of being brave and intelligent and he is praised, throughout Italy. Beatrice is deceived into believing them because she realises that what they are saying is sort of true. After hearing these things, Beatrice is in a different mood. She is more excited and her language changes. Shakespeare writes her lines in rhyme. ' What fire is in my ear? Can this be true? ...read more.

This is why Claudio is not allowed to see Hero's face until he promises to marry her in front of the friar. The final deception that Beatrice and Benedick uncover is that they were both fooled into loving each other. They uncover the trick that has been played on them. Beatrice becomes unsure of Benedick at this moment because she is scared that she has opened up her feelings too much and is worried that she is going to be hurt again. She is worried that she is going to be hurt and that Benedick will not love her as much as she loves him. Hero and Claudio bring them back together. They prove to Benedick and Beatrice that they have authentic feelings for each other because they have written lame poems for each other that are true and not artificial. Beatrice and Benedick are no longer deceiving themselves about their true feelings. The atmosphere is happy and joyful at the play's end. Don John has been captured, so Messina now knows that there will be no deception ever again. The dancing at the end of the play symbolises the happiness and unity of Messina now that evil has been conquered and all of the lies have been uncovered. They join hands to illustrate that they are a happy family and community again. In my view the dark setting contributes largely to the overall atmosphere of the play because it symbolises the evil nature of deception. 1 ...read more.