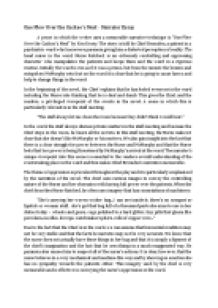 One flew over the cuckoos nest - Narrator essay

﻿One Flew Over the Cuckoo?s Nest - Narrator Essay A prose in which the writer uses a memorable narrative technique is ?One Flew Over the Cuckoo?s Nest? by Ken Kesey. The story is told by Chief Bromden, a patient in a psychiatric ward who has severe paranoia giving him a distorted perception of reality. The head nurse in the ward, Nurse Ratched, is an extremely controlling and oppressing character who manipulates the patients and keeps them and the ward in a rigorous routine. Initially the ward is run as if it was a prison, but from the minute the brazen and outspoken McMurphy sets foot on the ward it is clear that he is going to cause havoc and help to change things in the ward. In the beginning of the novel, the Chief explains that he has fooled everyone in the ward including the Nurse into thinking that he is deaf and dumb. This gives the Chief, and the readers, a privileged viewpoint of the events in the novel. ...read more.

We know that the nurse does not actually have these things in her bag and that it is simply a figment of the chief?s imagination and the fact that he sees things in a much exaggerated way. He paranoia also causes him to suspect all of the nurse?s actions. It is clear, however, that the nurse behaves in a very mechanical and machine-like way and by showing no emotion she has no sympathy towards the patients either. This imagery used by the chief is very memorable and is effective in conveying the nurse?s oppression in the ward. The chief?s paranoia also causes him to fear and despise any authority including the society which he sees as a giant machine known as ?the combine? and he sees the same machine at work in the hospital. This also reinforces the idea that the ward is a microcosm of society. The machine-like Combine tries to make machines out of everything, including humans. Bromden dreams that the hospital workers are killing Blastic, one of the patients referred to as a Vegetable. ...read more.

McMurphy is so bold and brash and disregarding of the Combine system, that he gives Chief hope that fitting into society is not what life is for. Eventually, Chief reveals that he can talk and hear just fine which is the turning point in the chiefs character because after this he takes part in the action a lot more instead of merely observing. Chief tries to protect McMurphy when he gets into a fight with the black boys. And he tries to protect McMurphy again when they go to the Disturbed ward and are given electroshock therapy. Ultimately, he fails to protect the man he has come to see as a Christ-like saviour as McMurphy is lobotomized. Yet in the end, when McMurphy finally returns to the ward as a vegetable, the chief smothers McMurphy as he knows that he would have not wanted to live in such a pitiful state. Because of McMurphy, Chief finally has the courage to break free from the hospital and he escapes and there is a strong sense of liberation. Overall the Chief?s unique narrative style in ?One Flew Over the Cuckoo?s Nest? contributes to the play being very memorable overall. ...read more.