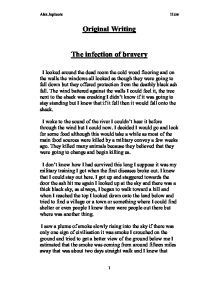 Original Writing The infection of bravery I looked around the dead room the cold wood flooring and on the walls the windows all looked as though they were going to fall down but they offered protection from the deathly black ash fall. The wind battered against the walls I could feel it, the tree next to the shack was creaking I didn't know if it was going to stay standing but I knew that if it fell then it would fall onto the shack. I woke to the sound of the river I couldn't hear it before through the wind but I could now. I decided I would go and look for some food although this would take a while as most of the main food sources were killed by a military convoy a few weeks ago. They killed many animals because they believed that they were going to change and begin killing us. I don't know how I had survived this long I suppose it was my military training I got when the first diseases broke out. I knew that I could stay out here. I got up and staggered towards the door the ash hit me again I looked up at the sky and there was a thick black sky, as always, ...read more.

I looked to the ceiling and there above me was an entrance to the loft, I used the barrel of my rifle and opened the hatch. I was horrified to see that there was no ladder, with my injury there was no way I would be able to pull my body through the hole. I opened one of the doors of the fallen wardrobe and found a small rope I didn't see how it would help me but I pulled out a couple of metal racks and stacked them up to make the gap smaller. I stood on them and put my kit in the loft and followed it a few minutes after I got in the door slammed open and almost fifteen animals poured in the room some tried to jump up into the hole but of course they couldn't reach the hole. I grabbed a grenade from my bag and threw it down the hole then replaced the hatch. The bang echoed in my ears for ages I didn't want to open the hole in case there were more animals down there. I searched around the loft until I found a weak spot where some tiles had fallen I kicked at the tiles until a large hole formed I slid myself through the hole onto the roof I climbed to the top and looked around. ...read more.

I broke through a huge tree line and then there in front of me was the wall to the village but then all the trees fell to the ground and there was the monster it was huge with great long teeth I wasn't tall it was just big I looked straight at me and then began to run at me I ran to the gate and the guard on the wall straight away shouted "Open the gate we got an un-infected one open the gate now!" the gate began to open and I ran faster. The beast got closer I felt in my pockets I had one more grenade and another two smoke grenades and I threw them all down and then ran as fast as I could nearly passing out as I did. I saw the wall and then I felt something push me from the back. I fell to the ground and when I turned the beast was on top of me I grabbed my pistol and just fired it the round went straight threw the animals head and then I followed it through with another four shots the animal fell to the ground I got up and continued running toward he wall and when I got in I just fell to the ground just glad to know I was safe. The End ?? ?? ?? ?? Alex Jephcote 11kw 1 ...read more.