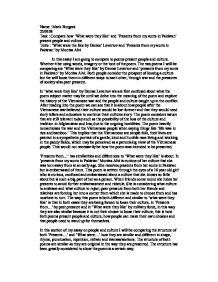 There is no rhythm or flow through the poem, broken up by the lack of sense and constant change of path the poem takes. There is still some structure to the poem, there is punctuation where is should be, maybe even mare so as she pauses to throw more ideas and thoughts onto the page. There are full stops and capital letters where expected at the start and end of ideas. Ideas are split into stanzas which shows the poem is not completely free from structure. There is no repetition or refrain which is only to be expected in a poem such as this, where there is no regular shape or structure. I believe the poet has intended for their to be no structure, as it shows turmoil in the writer's mind as she throws up the pro's and con's of embracing or rejecting her culture of which she knows so little about. It could also be written in this way to celebrate culture and diversity, by displaying her work in a unique and diverse way, I think this is the way Moniza Alvi wanted to display people and culture through the structure of her poem. In 'What were...' the structure is also unorthodox in the way it is presented. ...read more.

In 'Presents...' imagery is also used all of the time to help you imagine the presents that are sent from her aunts in Pakistan. At the same time similes and metaphors are used to describe the items of clothing by comparing the exotic items of clothing to other more familiar objects, such as when it says 'They sent me a salwar kameez peacock blue, and another glistening like an orange split open.' This is very useful when trying to imaging other items of clothing that are sent. It is much better way of describing what the thing looks like and a much clearer way of presenting the people and culture in the poem when we can relate to everyday items and not just a name that we cannot pronounce properly. One of the dresses is personified when it says ' I tried each satin-silken top was alien in the sitting-room'. This puts a clear image in your mind of how Moniza feels towards her new clothes, it shows that she is confused about her Pakistani culture as if it were alien to her. Personification is not used in 'What were...' but is used very effectively in 'Presents...' In both poems poetic devicesare used in ...read more.