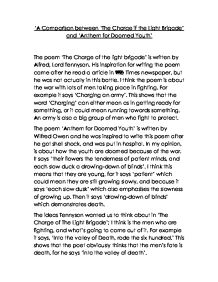 'A Comparison between 'The Charge if the Light Brigade' and 'Anthem for Doomed Youth' The poem 'The Charge of the light brigade' is written by Alfred, Lord Tennyson. His inspiration for writing the poem came after he read a article in The Times newspaper, but he was not actually in this battle. I think the poem is about the war with lots of men taking place in fighting. For example it says 'Charging an army'. This shows that the word 'Charging' can either mean as in getting ready for something, or it could mean running towards something. An army is also a big group of men who fight to protect. The poem 'Anthem for Doomed Youth' is written by Wilfred Owen and he was inspired to write this poem after he got shell shock, and was put in hospital. In my opinion, is about how the youth are doomed because of the war. It says 'their flowers the tenderness of patient minds, and each slow duck a drawing-down of blinds'. I think this means that they are young, for it says 'patient' which could mean they are still growing slowly, and because it says 'each slow dusk' which also emphasises the slowness of growing up. ...read more.

I find this interesting because its basically saying the men in the army is not to ask questions or to argue, but is to only fight and die. I think this is quite hurtful because it gives the army men no personality, and they just die, and receive no gratitude for their hard work. Also in 'Charge of the Light Brigade' I find this quote interesting, 'storm'd at with shot and shell, boldly they rode and well'. The effect of this quotation on me, gives me a very clear image in my head of the soldiers cantering heavily, being shot at from all directions, and the word 'boldly' suggests they done it without complaining and in braveness. This makes me feel very proud and kind of shocked about how courageously they rode, and how they should be greatly respected. In comparison, at the end of every stanza in 'Charge of the Light Brigade' it says something about 'the six hundred' which of course, are the men who rode and fought. I think Tennyson uses this repetition at the end of every stanza to make the reader think about the men. At the end of every stanza Tennyson uses this line and every time he manages to put a different atmosphere on the line which I find very appealing. ...read more.

He also uses Rhetorical Questions. He writes 'When can their glory fade?' and I think he uses a rhetorical question in it to emphasise that the men should not be forgotten, but he could also be being sarcastic, as if they are getting too much attention for what they have done. The quotation in 'Anthem for Doomed Youth' which I think signifies lots of poetry techniques is 'Only the stuttering rifles' rapid rattle'. This line using onomatopoeia as the letter 'p' and't' make you also spit the word out so it sounds real. Amazingly, it creates personification also because it says 'stuttering rifles' and people stutter, sometimes due to fear, so it creates the effect people are scared so they shot their rifles. This line also has alliteration of the letter 'r' which I think creates a brilliant kind of beating of words, which almost creates a song, and because its alliteration, you also try to read it faster, so it imitates the sound of the 'rifles' rapid rattle' Owen also uses juxtaposition in this quotation. 'The shrill, demented choirs of wailing shells'. This creates a juxtapose because he puts things together what don't usually go together, which in this example is religious world, and the Devil. By doing this he creates a clever metaphor which links really well, and sounds normal as you read it; when you think about it is really knowledgeable. ...read more.