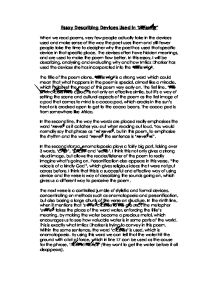 Essay Describing Devices Used in 'Blessing' When we read poems, very few people actually take in the devices used and make sense of the way the poet uses them and still fewer people take the time to decipher why the poet has used that specific device in that specific place. The devises often have hidden meanings, and are used to make the poem flow better. In this essay, I will be describing, analysing and evaluating why and how Imtiaz Dharker has used the devices she has incorporated into the 'Blessing'. The title of the poem alone, 'Blessing' is a strong word which could mean that what happens in the poem is special, almost like a miracle, which helps set the mood of this poem very early on. The first line, 'The skin cracks like a pod' is not only an effective simile, but it's a way of setting the scene and cultural aspects of the poem as the first image of a pod that comes to mind is a cocoa pod, which cracks in the sun's heat or is cracked open to get to the cocoa beans. ...read more.

The next verse is a controlled jumble of stylistic and formal devices, concentrating on methods such as onomatopoeia and personification, but also basing a large chunk of the verse on structure. In the ninth line, when it mentions that 'silver crashes to the ground', the metaphor 'silver' takes the place of the word water, enforcing the title's meaning, by making the water become a precious metal, which encourages us to see how valuable water is in some parts of the world. This is exactly what Imtiaz Dharker is trying to convey in this poem. Within the same sentence, the word 'crashes' is used, which is onomatopoeia. By using this word we can tell that the water hit the ground with a lot of force, which in line 17 can be used as the cause for the phrase, 'frantic hands' (they want to get the water before it all disappears). When I first read the phrase, 'roar of tongues', I automatically thought of tongues as in, the tongues of different languages. ...read more.

the commas make you stop for a short breath between each word, making the line slower, and more interesting. A final device used in the last paragraph is an oxymoron. In line 19, the oxymoron 'liquid sun' is used. This could mean that the water from the pipe has suddenly burst and brought hope. The oxymoron is just another way of expressing how badly we treat water. As a nation, when it rains we moan, and rush out for the smallest bit of sun whilst in Africa, they rely on the chance rain and use it resourcefully. This poem confused me at first with the sentence structure and the many devices used, but after taking the time to dissect the poem, we can see that all these devices just add to the impact and emphasis of how important water is to those who don't get it freely, and makes us feel guilty at just how we take it for granted and think of water as nothing. ?? ?? ?? ?? ...read more.

The student analyses the devices in the poem Ã¢â‚¬ËœBlessingÃ¢â‚¬â„¢ on all levels and shows thorough understanding of the principle message behind this poem. They analyse not only the words but the poem in its entirety, for example the effect certain ...

The student analyses the devices in the poem Ã¢â‚¬ËœBlessingÃ¢â‚¬â„¢ on all levels and shows thorough understanding of the principle message behind this poem. They analyse not only the words but the poem in its entirety, for example the effect certain devices have when the poem is read aloud, this includes the structure and sounds of the words. The essay is directly answering the question and doesnÃ¢â‚¬â„¢t go off topic.
#2 The students analyses the main phrases and words which have the greatest effect in this poem. Not only do they describe the primary effect and meaning but they are able to look at the phrase from another perspective or with the whole poem in mind to find a different or more in depth meaning. When analysing the phrases they also include valid evidence of their view point, for example Ã¢â‚¬Å“by using this word [crashes] we can tell that the water hit the ground with a lot of forceÃ¢â‚¬Â. The student especially focuses on the structure and the rhythm of the poem to show how the poet is truly emphasising her point. I like the paragraphs explaining the sound of individual words and phrases and how this affects the way the poem is read, for example their comments on the word Ã¢â‚¬Å“neverÃ¢â‚¬Â. This shows that the student has clearly read this poem aloud many times and explored its effects. The student also shows a progression of thoughts (for example in the paragraph about the Ã¢â‚¬Å“roar of tonguesÃ¢â‚¬Â) by showing the readers initial reaction before they realise the more appropriate meaning. The student summaries their essay very well by emphasising the meaning behind the poem and showing empathy with those in the situation described in Ã¢â‚¬ËœBlessingÃ¢â‚¬â„¢. The analysis shown by this student is incredible and I cannot find a single point to criticise them for as they have quite literally covered everything that could be included in the essay question.
#3 The student has clearly thought about their essay structure and this has resulted in a clear, detailed and well-ordered essay. Throughout they have used technical terms correctly and appropriately. The spelling and grammar are also very good.