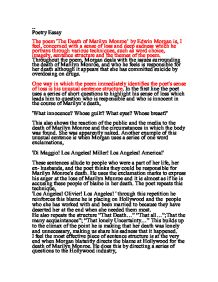 Poetry Essay on The Death of Marilyn Monroe

-- Poetry Essay The poem 'The Death of Marilyn Monroe' by Edwin Morgan is, I feel, concerned with a sense of loss and deep sadness which he portrays through various techniques, such as word choice, imagery, sentence structure and the themes of the poem. Throughout the poem, Morgan deals with the issues surrounding the death of Marilyn Monroe, and who he feels is responsible for her death although it appears that she has committed suicide by overdosing on drugs. One way in which the poem immediately identifies the poet's sense of loss is his unusual sentence structure. In the first line the poet uses a series of short questions to highlight his sense of loss which leads him to question who is responsible and who is innocent in the course of Marilyn's death, 'What innocence? Whose guilt? What eyes? Whose breast?' This also shows the reaction of the public and the media to the death of Marilyn Monroe and the circumstances in which the body was found. ...read more.

This emphasises her vulnerability. Moreover, imagery is another technique used by the poet to highlight Monroe's vulnerability and child-like quality which emphasises his sense of loss. He uses the metaphor, 'Crumpled orphan'. This is effective as orphans are usually thought of as children and this again highlights her innocence and therefore his sense of loss at such a vulnerable person being hurt. The word 'Crumpled' in the metaphor also shows this as it has connotations of vulnerable and scrunched or screwed up which has connotations of mental instability and shows, he feels, she did not really know what she was doing when she took her life. This metaphor links directly back to and reinforces the innocence and the idea of Monroe as a child in the sentence' ...child of America. ..' Morgan also uses personification effectively in the poem, 'That lonely Uncertainty should limp up, grinning, with bewildering barbiturates' This personifies her uncertainty with what to do with her life. The uncertainty is portrayed as a sleazy voyeur, preying on her pain and naivety while luring her to her death.The hard alliterative sound of the "b" and the placing of "bewildering barbiturates at the beginning of the line emphasizes her bewilderment and Morgan's pity for her. ...read more.

The poet holds the whole industry responsible for Marilyn Monroe's death as, he feels; they have driven her to it. At one point in the poem he does admit that Monroe herself would not blame others, quoting some words she had said to a friend shortly before she died, "..All I had was my life. I have no regrets, because if I made Any mistakes, I was responsible." She had made her own choices and knew she had to live with that. She lived in the present "What happened is behind. So it follows you around? So what?" However Morgan does not accept her analysis. He feels her death too strongly and is quite clear who he considers to be to blame. The fact that he repeats "Los Angeles" seven times in the course of the poem suggests that as far as he is concerned, although Monroe might have made her own decisions it was the pressures of Hollywood that drove her to them. In conclusion, therefore, 'The Death of Marilyn Monroe' is a poem in which Edwin Morgan effectively portrays his sense of loss at her death using the techniques of sentence structure, imagery, word choice and theme. ...read more.