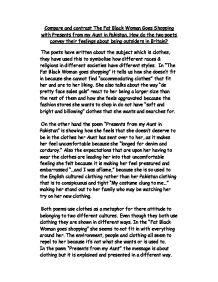 Poetry From Other Cultures

Compare and contrast The Fat Black Woman Goes Shopping with Presents from my Aunt in Pakistan. How do the two poets convey their feelings about being outsiders in Britain? The poets have written about the subject which is clothes, they have used this to symbolise how different races & religions in different societies have different styles. In "The Fat Black Woman goes shopping" it tells us how she doesn't fit in because she cannot find "accommodating clothes" that fit her and are to her liking. She also talks about the way "de pretty face sales gals" react to her being a larger size than the rest of them and how she feels aggravated because the fashion stores she wants to shop in do not have "soft and bright and billowing" clothes that she wants and searches for. ...read more.

The environment, people and clothing all seem to repel to her because it's not what she wants or is used to. In the poem "Presents from my Aunt" the message is about clothing but it is explained and presented in a different way. The message of the poem "Presents from My Aunt" is the narrator feels that she belongs neither in Britain or Pakistan but feels that she can't show her Pakistan background and feel like she fits in British culture. and the poet has shown us that by using particular language differences "My salwar kameez didn't impress the school friend who sat on my bed" this shows that because of her friends not liking her clothing from Pakistan that she doesn't belong in Britain and that what she has to offer is not good enough in the culture in Britain. ...read more.

The effect of this is the fat black woman is proud of her culture and the way she has been brought up and the other poem is the opposite in which she feels that she is stuck between the cultures she is. I feel that "The Fat Black Woman Goes Shopping" is the better poem out of the two in the way the language is used. She has written it in her cultural language and the way she has done this makes it funny, and because it has humour in it, it will be the one that I remember the most. Her personality is the one out of the two poems that come across the most because I feel that the girl out of "Presents from my Aunt" is confused with who she is; where as the Guyanese Black woman knows exactly who she is because she is proud of her background, culture and how she is different among people in Britain. By Aaron Jenkins ...read more.