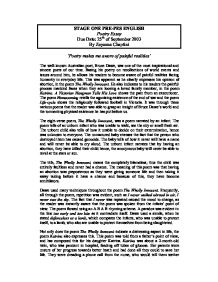 STAGE ONE PRE-PES ENGLISH Poetry Essay Due Date: 25th of September 2003 By Zeyanna Chaptini 'Poetry makes me aware of painful realities' The well-known Australian poet, Bruce Dawe, was one of the most inspirational and sincere poets of our time. Basing his poetry on recollections of world events and issues around him, he allows his readers to become aware of painful realities facing humanity in everyday life. This was apparent as he clearly expresses his opinion of abortion, in the poem The Wholly Innocent. He also indicates to his readers the painful process mankind faces when they are loosing a loved family member, in the poem Katrina. A Victorian Hangman Tells His Love shows the pain from an executioner. The poem Homecoming retells the agonising existence of the end of war and the poem Life-cycle shows the religiously followed football in Victoria. It was through these various poems that the reader was able to grasp an insight of Bruce Dawe's world and the tormenting physical existence he has put before us. The eight-verse poem, The Wholly Innocent, was a poem narrated by an infant. The poem tells of an unborn infant who was unable to walk, see the sky or smell fresh air. The unborn child also tells of how it unable to decide on their extermination, hence was unknown to everyone. The unmanured baby stresses the fact that the person who destroyed them has caused genocide. The baby tells of how it never will have a name and will never be able to cry aloud. ...read more.

He then asks the accused if he was able to tie his hands to the side of his body. He told the accused that he knows what he's feeling and tied the rope around his neck. The hangman adjusted the canvas hood and the media were prepared to take photos. With the pull of the hangman's lever to trap door opened and the accused left this world and move on. The hangman then states, that the accused would be the evening's headlines. The title A Victorian Hangman Tells His Love unmistakably means a Victorian hangman, who told his love, in this case he meant the accused, concerning how much he disliked murdering innocents, yet only continued to do so as it was his job. The meaning of this poem was that if you commit a crime, you must pay for your actions, However in this case, Dawe made it clear that murdering someone was indecorous as you only receive once chance at life. Dawe used many techniques during this poem. Similes were recurrently used, for example, in the line, two-piece track-suit, welder's goggles and a green cloth cap like some gross bee, here he compared himself to a abhorrent bee. Another simile was used in the line as gently as a leaf meaning when you fall; it will be smoothly, just as leaves do. Metaphors were also evident in this poem; for instance I know your heart is too full at this moment, which means, the hangman was aware that his heart was brimming. ...read more.

streamers...scarfed ...Demons...Saints...ladder...final term...three-quarter-time...boundary fences. Dawe's tone I was infrequently mocking. He respected the strength of football's occupied life and the life-sustaining characteristics it offered. He knew it is a life-giving religion offering an initiation, a journey, a wedding, a honeymoon and salvation. He does not deny its worth nor does he fully side with its rituals. He respects the fact that League football is a perpetually renewing mythology and although the dancers change, the dance goes on. Dawe purposefully made the last word of the poem salvation. This word generally associated with heaven and the fact that living a good, Christian life will lead to our salvation and we will go to heaven, not hell. But it was not from God that these people gain their salvation - they see salvation in the strong football player who has come to play for their team and could bring the team victory. In conclusion, it was quite evident that the talented Bruce Dawe basis his poetry on memories of world events and the issues that mankind confront during their everyday routines. It was through the poems The Wholly Innocent, Katrina, A Victorian Hangman Tells His Love, Homecoming and Life-cycle that opened the public's eyes to the misfortunes of society. Dawe challenges society, pointing out all of the unfairness and hardships that ordinary people face every day. He shows us how we can become selfish and materialistic, and how we can become so involved in something that we no longer recognise the beauties of life and nature. He makes these morals accessible to all people through his poetry, communicating his ideas and ethics accurately. ...read more.