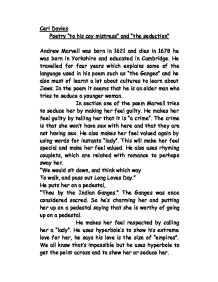 Ceri Davies Poetry "to his coy mistress" and "the seduction" Andrew Marvell was born in 1621 and dies in 1678 he was born in Yorkshire and educated in Cambridge. He travelled for four years which explains some of the language used in his poem such as "the Ganges" and he also must of learnt a lot about cultures to learn about Jews. In the poem it seems that he is an older man who tries to seduce a younger woman. In section one of the poem Marvell tries to seduce her by making her feel guilty. He makes her feel guilty by telling her that it is "a crime". The crime is that she won't have sex with here and that they are not having sex. He also makes her feel valued again by using words for instants "lady". This will make her feel special and make her feel valued. He also uses rhyming couplets, which are related with romance to perhaps sway her. "We would sit down, and think which way To walk, and pass out Long Loves Day." He puts her on a pedestal, "Thou by the Indian Ganges." The Ganges was once considered sacred. ...read more.

He is saying that if she doesn't have sex with him know that when she dies the worms will have sex with her and they will crawl inside her as he wanted to and eat away at her virginity. This is a powerful quote from the poem but is also a frightful one. It works well because his intention was to make the reader squirm and it did just that. It is very gruesome but it would make you think twice about dying a virgin. I think that in section two when he relates to the ashes, "And into ashes all my lust." He is saying that when she's he will no longer want her. So she should have sex with him know and enjoy it whilst it last other wise she will die a virgin and then the worms will have her as he wanted her and they will eat away at her virginity. Also ashes relates to burning out of his love which when something burns out there will be no attraction. So when she is older he won't want her and time is running out. Also ashes relate to death because when you die instead of the worms getting her she might get cremated but he says that is she does get cremated his lust will die and her ashes will be all that is left of his attraction to her. ...read more.

The poem of seduction was written by Eileen Mcauley it is about a young boy and an adolescent girl who meet at a party and get talking. It's an average party with drink and dancing. After getting to know each other they begin to kiss and before she knows it she's three months pregnant. She's upset about it and takes her anger out on things in her room. She was frightened and what was worse was that she knew it and admitted it to herself. The young girl is in her own world in her prime, she was living in a magazine or comic strips were nothing was real. She was only going on 16. She's thinking of all she will miss because she's pregnant. She's trying to say or reassure herself that she's not "a little slag." Just by reading the title of the second poem "the seduction" you know that it is going to be a cold poem because the title relates to what the poem is going to be about seduction. If you thought this you would be right it's about, as I said above, a young boy who seduces a young girl in a night of drunkenness. It was set in an extremely rough part of Liverpool were the people went about their business ...read more.