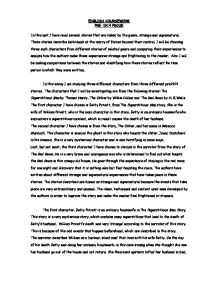 ENGLISH COURSEWORK PRE-1914 PROSE In this unit I have read several stories that are linked by the genre, strange and supernatural. These stories describe individuals at the mercy of forces beyond their control. I will be choosing three such characters from different stories of related genre and comparing their experiences to analyse how the authors make these experiences strange and frightening to the reader. Also I will be making comparisons between the stories and identifying how these stories reflect the time period in which they were written. In this essay I am studying three different characters from three different pre-1914 stories. The characters that I will be investigating are from the following stories: The Superstitious Man by Thomas Hardy, The Ostler by Wilkie Collins and The Red Room by H. G.Wells. The first character I have chosen is Betty Privett, from The Superstitious Man story. She is the wife of William Privett, who is the main character in this story. Betty is an ordinary housewife who encounters a superstitious incident, which in result causes the death of her husband. The second character I have chosen is from the story, The Ostler, and her name is Rebecca Murdoch. This character is seen as the ghost in this story who haunts the Ostler, Isaac Scatchard in his dreams. She is a very mysterious character and is also horrifying in some ways. Last, but not least, the third character I have chosen to discuss is the narrator from the story of The Red Room. He is a very brave and courageous man who is determined to find out what haunts the Red Room in this creepy old house. He goes through the experience of staying in the red room for one night and discovers that it is nothing else but fear haunting the room. The authors have written about different strange and supernatural experiences that have taken place in these stories. ...read more.

There is an appeal to senses and personification is used to make the descriptions more interesting to the reader. An example of this is shown when the author describes the weather, 'The bleak autumn wind was still blowing, and the solemn, monotonous, surging moan of it in the wood was dreary and awful to hear through the night silence.' He uses many interesting adjectives to make this extract appealing to the reader. He also uses personification to make it more engaging to the reader, because he gives the wind and woods the personality of humans by using words such as, 'surging moan'. We all know that woods do not moan but the sounds that the winds were making were almost as if the woods were moaning. He relates to the reader like this because we all know what moans sound like therefore can imagine the sounds heard by Isaac, making the story more realistic. The third character that I have chosen is from the story, The Red Room. He is the narrator of the story but his name is not given so we do not know what he is called. This story is slightly different to the other two because the narrator is like the main character in the story and it is in present tense. Again the author is using first-person point of view, this makes the reader more interested in the story because it is like they are being involved in the conversations. This story also starts off with speech, like The Superstitious Man Story, which immediately draws the reader into the story. The settings are also very 19th century like because the setting is in an old, haunted house which is said to have a haunted room. The narrator wants to find out what is so scary about this room, the red room, and he goes to investigate. The author uses many different techniques whilst describing the narrator's experience in this house to make it strange and frightening for the readers. ...read more.

to people nowadays because there are many people who are still afraid of the dark and it can be a fear for anyone. I think the reason why people have this fear is because in the dark they are unable to or see very little of the surroundings therefore images and objects automatically form in their imagination, making it seem more realistic to them because they start believing in their imagination. Even though there is more scientific knowledge now than before, there are still thousands and thousands of unexplained events which are justified by the theories from the past. In these stories the authors describe individuals at the mercy of forces beyond their control. These forces are things such as strange and supernatural, ghosts, dreams and nightmares, etc. All of these things are beyond people's control; they just happen without people knowing and they shock or scare the people when such an event takes place. The moral, philosophical and social significance of the text relates not only to the people of the 19th century but also to the reader's of today. It is significant to both readers because it teaches us the moral, social and philosophical understandings and explanations for these strange and supernatural occurrences. The writer's narrative craft and appeal to the reader is shown through the style, structure, imagery, language and characters. The authors use a variety of techniques to grab the reader's attention and to create a feeling of suspense and terror throughout the story. There are several different patterns and details of language exploited for implication or suggestion, for example emotive, ironic, and the figurative effect. The authors use these effects to make the story more appealing to the audience and to create suspense or to build tension, al of which result in a more interesting superstitious story. The range of effects achieved by the writer makes the story as a whole very interesting to read and keeps the reader at the edge of their seat. ?? ?? ?? ?? ...read more.