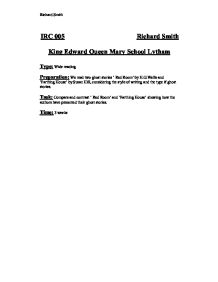 IRC 005 Richard Smith King Edward Queen Mary School Lytham Type: Wide reading Preparation: We read two ghost stories ' Red Room' by H.G.Wells and 'Farthing House' by Susan Hill, considering the style of writing and the type if ghost stories. Task: Compare and contrast ' Red Room' and 'Farthing House' showing how the authors have presented their ghost stories. Time: 3 weeks Introduction I am comparing and contrasting two short stories from before 1900 and after 1900 and how each story is written to create an atmosphere and how the authors have presented their stories. 'I can assure you, said I, that it will take a very tangible ghost to frighten me.' This is the opening line to the story ' Red Room'; the opening line tells the reader a lot about the storey before setting the scene. To the reader the person comes across to be a brave person with a sarcastic and boastful manner. ' I have never told anyone this before.' ...read more.

The stories portray the characters as opposites. In Red Room the man comes across as, brave yet big headed and boastful, however, towards the end of the story the man is confronted by a ghost and he becomes scared. The man seems to have a nervous break down and is extremely apologetic to the other people who advised him, the ghost makes him become his opposite, and changes his thoughts and beliefs. The woman in Farthing House is quiet and shy because she is telling a storey about her own experience. The woman appears to be sceptical about whether she has actually seen the ghost and she tries to take her mind of it and tries to come up with other explanations instead of them being the actions of a ghost. When the woman is confronted with the ghost she does not hesitate and does not seem scared, ' I was desperate to follow her, because I felt she needed me in some way' The reason for the different reactions of the characters is partly to do with the different appearances of the two ghosts. ...read more.

All the detail of the house is very gothic and slightly unreal. The gothic scenery and setting is very important, as it adds to the tension and detail of the storey and it is also a very useful way to build up to a moment of drama. In this story many of the events have a dramatic effect and some of the lines are very theatrical, ' With a cry of terror, I rushed to the alcove.' The scenery and the dramatic emphasis on the words all work together to add to the effect of a classic pre 1900 gothic ghost story. 'Farthing House' is set in a modern day world. The setting is much less dramatic and does not play as larger part in the story as the scene in 'Red Room', however, the character in the story does describe her surroundings in detail but is not suspicious of anything about the place unlike the character in 'Red Room'. The story is mainly revolved around the feelings of the character in the play;' that feeling of unease and melancholy', 'I feel I have to tell the whole truth', 'I was very tired'. ?? ?? ?? ?? Richard Smith ...read more.