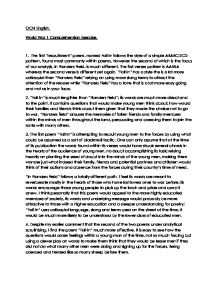 OCN English. World War 1 Comprehension Exercise. 1. The first "recruitment" poem, named Fall In follows the style of a simple ABABCDCD pattern, found most commonly within poems. However the second of which is the focus of our analysis, In Flanders Field, is much different. The first verses pattern is AABBA whereas the second verse is different yet again. "Fall In" has a style the is a lot more colloquial then "Flanders Field" relying on using more slang terms to attract the attention of the reader while "Flanders Field" has a tone that is a lot more easy going and not as in your face. 2. "Fall In" is much lengthier than "Flanders Field"; its words are much more direct and to the point. It contains questions that would make young men think about; how would their families and friends think about them given that they made the choice not to go to war. ...read more.

"In Flanders Field" follows a totally different path. I feel its words are meant to reverberate mostly in the hearts of those who have lost loved ones to war before; its words encourage those young people to pick up the torch and pride and carry it anew. I think personally that this poem would appeal to the more highly educated members of society, its words and underlying message would probably be more attractive to those with a higher education and a deeper understanding for poetry; "Fall In" uses colloquial language, slang and terms used on the street at the time, it would be much more likely to be understood by the lower class of educated men. 4. Despite my earlier comment that the second of the two poems under analytical scrutinising, I find the poem "Fall In" much more affective. ...read more.

Too many. 6. I feel on a personal level that the shorter of the two poems is much more affective, this is due mainly to its mention of God. Most armies will use God to raise the morale of their troops, or simply to give good reasoning to their cause; with God on their side how could they lose? "War Exalts" will raise the question within any religious mind; what exactly does God think of war itself? To see your creations killing themselves in your name would upset anyone. Beliefs are harder to change, people fight against them and don't wish to have them altered, is it not better to have a good idea? Truthfully and from the heart this poem touched me, bringing to mind yet again the family members that have, and still are, fighting overseas in the name of God and country. Truly an affective poem. ...read more.