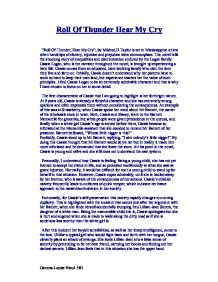 Roll Of Thunder Hear My Cry

Roll Of Thunder Hear My Cry "Roll Of Thunder, Hear My Cry", by Mildred.D.Taylor is set in Mississippi at a time when hardships of slavery, injustice and prejudice were commonplace. The novel tells the shocking story of inequalities and discrimination endured by the Logan family. Cassie Logan, who is the narrator throughout the novel, is brought up experiencing a hard life. Cassie comes from an educated, hard-working family who own the land they live and farm on. Initially, Cassie doesn't understand why her parents have to work so hard to keep their own land, but experience teaches her the value of such principles. I find Cassie Logan to be an extremely admirable character and that is why I have chosen to focus on her in some detail. The first characteristic of Cassie that I am going to highlight is her forthright nature. At 9 years old, Cassie is already a forceful character and she has extremely strong opinions and often expresses them without considering the consequences. An example of this was in Strawberry, when Cassie spoke her mind about Mr Barnett, the owner of the wholesale store in town. Both, Cassie and Stacey, went to the Barnett Mercantile for groceries, but white people were given precedence in the queues, and finally when a white girl Cassie's ...read more.

Lillian-Jean feels that in this situation she has the upper hand. Then Cassie gets her in the bushes and gives Cassie a good beating, cunningly enticing Lillian-Jean to hit her first. Cassie plans it like a strategic carefully manoeuvred battle, getting advice from her father. She also gets Big Ma, her grandmother to braid her hair so Lillian-Jean could not pull it in the fight. For a 9 year old she is very bright and discerning, as she leaves no marks or bruises on Lillian-Jean, so there is no evidence for anyone to accuse her of the beating. Cassie gets full satisfaction as she gets Lillian-Jean to give her a full apology; excusing her and her family for all the ill treatment they had given her family. I also feel that Cassie learns to be prudent in order to protect her family and her community. Harsh experience such as the incidents in Strawberry, have taught her to defend herself with intelligence and skill. A whole train of events led up to the exciting climax: the family were having financial difficulties because of Mr Logans injury, so they are entirely dependent on their crop. However, in order to deflect attention from TJ, Mr Logan sets fire to the crops. ...read more.

However, she is most careful in her risk taking and tries to reduce the danger to herself. Cassie learns the value of not telling everybody, everything she knows. Her mature attitude comes across effectively in the TJ incident. Once, Cassie would have wanted to know the whole story about TJ Avery's run in with the law. At that point she knows that it was something her brothers did not need to know, as it would only frighten them. Cassie realises that if the boys need to know, her Mother and Father would inform them of the details, as it is not her place to frighten them. Cassie demonstrates that, despite her earlier outspokenness, she has learned to accept her status in society. Throughout the novel, Cassie goes through the same experiences as many adolescents, such as parental conflict and the desire for independence. However, as a young Black girl growing up in the prejudiced Deep South of America during the 1930's, she also experiences unwarranted hardships due to her colour. During the course of this novel, Cassie learns to deal with these hardships, and as a result she matures very quickly. This maturity comes at a price, for Cassie she learned that she must sacrifice honesty and dignity in order for her and her family to survive. Gemma-Louise Nicol 5R1 ...read more.