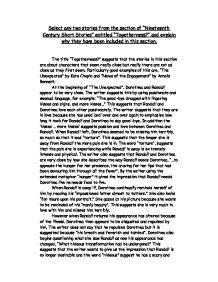 Select any two stories from the section of &quot;Nineteenth Century Short Stories&quot; entitled &quot;Togetherness?&quot; and explain why they have been included in this section.

Select any two stories from the section of "Nineteenth Century Short Stories" entitled "Togetherness?" and explain why they have been included in this section. The title "Togetherness?" suggests that the stories in this section are about characters that seem really close but really there are not as close as they first seem. Particularly good examples of this are, "The Unexpected" by Kate Chopin and "News of the Engagement" by Arnold Bennett. At the beginning of "The Unexpected", Dorothea and Randall appear to be very close. The writer suggests this by using passionate and sensual language, for example: "The good-bye dragged with lingering kisses and sighs, and more kisses..." This suggests that Randall and Dorothea love each other passionately. The writer suggests that they are in love because she has used 'and' over and over again to emphasise how long it took for Randall and Dorothea to say good-bye. In addition the 'kisses ... more kisses' suggests passion and love between Dorothea and Randall. When Randall left, Dorothea seemed to be missing him terribly, so much so that it was "torture". This suggests that the longer she is away from Randall the more pain she is in. ...read more.

The writer suggests this by using sensual language, such as: "he held her in his arms with what seemed to be a frenzy of passion; a keen and quickened desire". Because he still loves her he offers her marriage, "let the marriage be at once", and all of his possessions, "if worst should come I want you to have all I possess." But in response, "she attempted to withdraw from his embrace". This is different from the beginning when she clung to him "until the last wrench came", and she also replies "never, never, never!" This emphatic language suggests she does not love Randall and she is not going to change her mind. Therefore it is clear that Randall and Dorothea are not really as close as it first appeared. In the beginning the writer used passionate language, which lead us to believe they were really close, but when Randall got ill, Dorothea did not love him anymore. This suggests her love was based on desire and on his looks. At the beginning of "News of the Engagement", Phillip and his mother appear to be really close. ...read more.

At the beginning of the story he thinks of her as his 'plump little mother' but when she tells him of her engagement, he soon realises that she is a woman, who attracts men, "I never realised that she was desirable, and that a man might desire her." This then makes the reader realise that Phillip and his mother were not as close as they first thought because it is obvious that Phillip does not know his mother very well. Also we know they are not very close because in their letters they just spoke of gossip and spoke nothing about any important things, i.e. engagements. "You can't write even to your mother and say in cold blood: I think I'm beginning to fall in love with Agnes." Therefore it is clear that both of these stories are in the section called "Togetherness?" because they are stories about characters that seem to be closer than they actually are. In "The Unexpected", Randall and Dorothea seem to be close and very much in love but as the story progresses it is clear that their love and relationship is based on desire. In "News of the Engagement", Phillip and his mother seemed to be close, but at the end of the story it is clear that they hardly know anything about each other. ?? ?? ?? ?? ...read more.