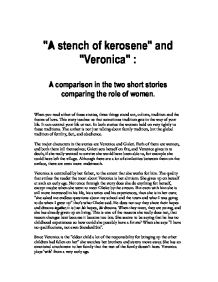 &quot;A stench of kerosene&quot; and &quot;Veronica&quot; :A comparison in the two short stories comparing the role of women.

"A stench of kerosene" and "Veronica" : A comparison in the two short stories comparing the role of women. When you read either of these stories, three things stand out, culture, tradition and the theme of love. This story teaches us that sometimes tradition gets in the way of your life. It can control your life or not. In both stories the women hold on very tightly to these traditions. The author is not just talking about family tradition, but the global tradition of fertility, Sati, and obedience. The major characters in the stories are Veronica and Guleri. Both of them are women, and both them kill themselves; Guleri sets herself on fire, and Veronice gives in to death, if she really wanted to survive she would have been able to, for example she could have left the village. Although there are a lot of similarities between them on the surface, there are even more underneath. Veronica is controlled by her father, to the extent that she works for him. The quality that strikes the reader the most about Veronica is her altruism. She gives up on herself at such an early age. Not once through the story does she do anything for herself, except maybe when she went to meet Okeke by the stream. ...read more.

The way she gives her life to everyone, but never really uses it herself. Once 'Stench of kerosene' is read over a few times, the reader realizes that Guleri is really selfish. She refuses to compromise and does not even consider or think about not going. But then again how could she not go when she "always counted the days to the harvest". The author uses the sound of the characters name and the setting they each belong to in 'Veronica'. Veronica stays in the village and Okeke moves to the city. This shows how the person is fit for each place indirectly. When Okeke says "That was the trouble with village life: nothing ever changed"; it was as if he was talking about Veronica. While, Okeke "went to the city and made good", Veronica never changed. It was only her appearance that changed over the years, because she did not want to, or was afraid of change. It is strange but, Veronica and Okeke "had grown up together" in the native village, and yet Okeke ended up moving on to a different path, while Veronica never moved at all. The stream and the flute both symbolize love in different forms. ...read more.

When Veronica tells Okeke that she needs to get back because she has to go prepare dinner for her father, she doesn't seem to mind and nor does she complain, as she knows it is tradition to help out in the house as she is the eldest. This shows how easy it is for the parents who symbolize tradition, to control their sons and daughters. In 'Veronica' the narrator is directly involved in the story unlike the narrator in 'A Stench of Kerosene' who is not. This adds a sense of closeness and involvement. Some could argue that this story is more enjoyable to read than the other as you feel closer to the character, I don't think this is the case. In ' A Stench of Kerosene' the husband was distant from the wife so maybe having a narrator reflected this more effectively. It is ironic that in both stories a son could have saved the woman. If Guleri had conceived a son, she would have stayed alive. If Veronica's son had not died, she would have lived, or at least tried harder to survive. This explains the women's personalities very plainly- Guleri killed herself because she did not get what she wanted showing her weakness and immaturity; while Veronica lived for others. When her son dies there was no one left to live for reflecting her generosity and responsibility. ...read more.