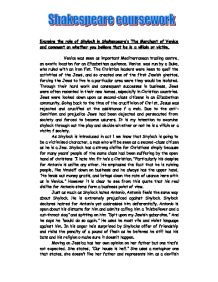 Shakespear Coursework - The Merchant of Venice

Examine the role of Shylock in Shakespeare's The Merchant of Venice and comment on whether you believe that he is a villain or victim. Venice was seen as important Mediterranean trading centre, an exotic location for an Elizabethan audience. Venice was run by a Duke, who ruled with an iron fist. The Christian leaders were keen to quell the activities of the Jews, and so created one of the first Jewish ghettos, forcing the Jews to live in a particular area were they would be isolated. Through their hard work and consequent successes in business, Jews were often resented in their new homes, especially in Christian countries. Jews were looked down upon as second-class citizens in an Elizabethan community. Going back to the time of the crucifixion of Christ, Jesus was rejected and crucified at the assistance f a mob. Due to the anti-Semitism and prejudice Jews had been dejected and persecuted from society and forced to become usurers. It is my intention to examine shylock through out the play and decide whether or not he is a villain or a victim f society. As Shylock is introduced in act 1 we know that Shylock is going to be a victimised character, a man who will be seen as a second-class citizen as he is a Jew. Shylock has a strong dislike for Christians simply because for many years' people of the same class had been suffering by the open hand of christens "I hate him fir he's a Christian." ...read more.

"Is it true, is it true," "good news, good news." His use of reputation in these words accentuates his satisfaction; they show how excited he is at this time. As soon as Antonio's misfortunes are mentioned Shylock immediately brightens up, from this he would receive prophet and his bond is now becoming more reality than a come true. The 16th century audiences would have thought very negatively of his as they were Christian and him a Jew. Shakespeare provides his creation with words; he is now made out to be the typical villain of the play. "I am very glad of it-I'll plague him, I'll torture him-I am glad of it." Reputation is used again at this particular point. This quote creates a negative imagery of Shylock and with Shakespeare's technique he allows the audience to change their opinion of what they think about him and turn the situation around. Shylock wants the bond as he becomes more obsessive of Antonio, "I will have the heart of him if he forfeit." He is highlighting that nothing can possibly get in his way from getting his revenge. I believe that Shakespeare was hoping to evoke sympathy from the audience by using his skill as a dramatist, as he has the ability of doing so. In the course of this he is hoping to defeat the idea of prejudice and not have people judge others by their religion but by their character. Before we get to the main climax of the play, just before the trial we can she how the relationships between Antonio and Shylock have been reversed. ...read more.

Shylock leaves quickly, unwell and we are made to think what happens to him. His life is ruined, humiliated in cause of revenge. Broken down at this point his stature would be heartbreaking, becoming so close to a dream and was not aware of what was happening at that present moment. As the play ends Shylock, a man who was so confident, who believed that he could achieve what he desperately wanted, to man who owns nothing. Is no more the one thing that was mostly important in his life, a Jew but now a Christian. He is seen to be a villain by Elizabethan audiences as they were prejudiced towards Jews but seen to be a victim by other modern day audiences, but I believe that Shylock is equally both. For instance he was willing to kill an innocent Christian for not paying debts, so this makes him a villain. However he says "the villainy you teach me I will execute, and it shall go hard but I will better the instruction." "fed with the same food, hurt with the same weapons, cooled and warmed by the summer just like a Christian is." These words make me believe that this man is a victim, makes me feel sympathy for him as he is just as equal as everyone else but is treated like a second-class citizen only because he is a Jew. He emphasises his humanity and the prejudice he suffers from but we need to remember he is as equal as anyone else but is seen a villain because he wanted to take a Christians life. But his reasons make us understand why. ...read more.