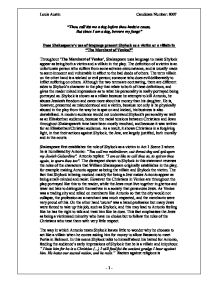 "Thou call'dst me a dog before thou hadst a cause, But since I am a dog, beware my fangs" Does Shakespeare's use of language present Shylock as a victim or a villain in "The Merchant of Venice?" Throughout 'The Merchant of Venice', Shakespeare uses language to make Shylock appear as being both a victim and a villain in the play. The definition of a victim is an unfortunate person who suffers from some adverse circumstance, and is usually made to seem innocent and vulnerable in affect to the bad deeds of others. The term villain on the other hand is a wicked or evil person; someone who does evil deliberately to inflict suffering on others. Although the two terms are contrasting, there are different sides to Shylock's character in the play that relate to both of these definitions, and gives the reader mixed impressions as to what his personality is really portrayed being portrayed as. Shylock is shown as a villain because he attempts to kill Antonio, he abuses Jessica's freedom and cares more about his money than his daughter. He is, however, presented as misunderstood and a victim, because not only is he physically abused in the play from the way he is spat on and kicked, his business is also destabilised. A modern audience would not understand Shylock's personality as well as an Elizabethan audience, because the racial tensions between Christians and Jews throughout Shakespeare's time have been mostly resolved, and because it was written for an Elizabethan/Christian audience. ...read more.

The fact that Shylock chooses to punish Antonio in this way emphasises the hatred he feels towards him, as what he intends to do is twisted and devised to bringing about the utmost amount of pain from him. The fact that the reader never gets to find out what Shylock intends to do with the pound of flesh brings about the idea of him keeping it as a trophy, which adds to the villainous character of Shylock that is built up throughout the play. The abuse suffered by Shylock however outweighs much of his abuse given. Antonio is the most prominent Christian in the play, and is also the most prominent abuser of Shylock. He kicks, spits, and attacks his business openly. While this may seem an odd choice for a hero, he is seen as a fighter in a crusade against the Jews, another example of how a modern audience wouldn't see a driving force in 'The Merchant of Venice', but an Elizabethan audience would, because most Christians at the time thought usury was a mortal sin that could not be forgiven. A man named Thomas Wilson wrote about the sins of usury in 1572, saying: 'Usury is a sin directly against all law, against nature and against God. And what should this mean, that instead of charitable dealings and the sue of alms, hardness of heart hath now gotten place,' dismissing it as a livelihood based on greed'. He also said that 'men have altogether forgotten true lending and given themselves wholly to live by foul gaining'. ...read more.

If he truly believed in the Jewish faith, he would have accepted death, rather than accept Christ. Added to this will be the expulsion from the Jewish community, and all who could help him, and would understand his need to damage Antonio, yet also his non-acceptance into Christian society, as converts were regarded as social lepers. He resignedly says 'send the deed after me, I will sign it' and leaves. The Christians show no mercy when they have a Jew held in their sway, and the only Christian who shows mercy, ironically, is the one who first abused Shylock. Antonio saves Shylock from death, and gives Shylock the share of his money that was awarded to him, back. No character in the Merchant of Venice is represented as being truly good or bad. Antonio saves Shylock's life, refuses to take his possessions, and signs a potentially fatal bond with Shylock for his friend. However, he also racially abuses Shylock, tries his very best to ruin him, and forces him to convert from his religion, his most prized possession. Jessica robs her father, trades her dead mother's possessions for monkeys, and leaves no explanation. She's also sheltered from every part of life but her own. Next to the vast array of characters and motivations in Shakespeare, Shylock's murderous streak appears to be down to the way he is treated in society, and brings up the question as to whether if he was treated in the appalling way he was, would Shylock have acted so villainous in the play? ?? ?? ?? ?? Louis Austin Candidate Number: 8007 - 1 - ...read more.