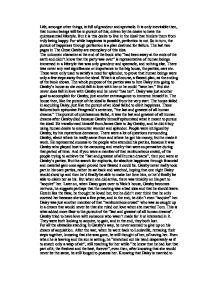 So in turn, the pursuit of happiness through perfection is a plan destined for failure. The last two pages in The Great Gatsby are exemplary of this idea.

Life, amongst other things, is full of grandeur and spectacle. It is only inevitable then, that human beings will be in pursuit of this, driven by the desire to have the quintessential lifestyle. But it is this desire to live in the ideal that hinders them from truly being happy. For while happiness is possible, perfection is not. So in turn, the pursuit of happiness through perfection is a plan destined for failure. The last two pages in The Great Gatsby are exemplary of this idea. The unknown character at the end of the book who "had been away at the ends of the earth and didn't know that the party was over" is representative of human beings immersed in a lifestyle that was only grandeur and spectacle, and nothing else. There was never any real significance or importance to the big house, the parties, cars etc. These were only used to satisfy a need for splendor, to prove that human beings were only a few steps away from the ideal. Which is of course, a flawed plan, as the ending of the book shows. The whole purpose of the parties was to lure Daisy into going to Gatsby's house so she could fall in love with her or he could "have her." ...read more.

Later on, when Daisy goes over to Nick's house, Gatsby becomes nervous, he suggests perhaps that the meeting was a bad idea and that he should leave. Herein lies the flaw, he thought he loved her, but he didn't ever think that he only coveted her because she was a fine prize, and in the end, he didn't even "acquire" her. Daisy was just another member of that "rambunctious crowd" who was so caught up in a dream that would never be that she ruled out love when she married Tom. This is what added more flaw to the pursuit of the "last and greatest of all human dreams". Gatsby tried to have love with someone who wasn't made for it or interested in it. They were both looking to acquire, to gain, and in the end, they both lost. For all the obstacles standing in Gatsby's way, he never seemed to give up on his dream of acquisition. After the war, when he went back to Louisville, retracing their steps together, knowing that she was gone, he still thought of her, of having her. Even when he is leaving and the sun is setting, he "stretched out his hand desperately as if to snatch only a wisp of air", still reaching for ...read more.

His house was directly across from Daisy so he could have more of a chance of acquiring her. He displays nearly all his wardrobe in front of her so he can impress her, the sole purpose of his parties-to get her there, and so on and so forth. He was completely obsessed with her, with his dream, that he never realized that it died when she married Tom. Despite all the things that stood in the way of Gatsby's dream, he never let up. The only thing that kept him from trying even harder was death itself, which was inevitable. He always retained a fragment of hope, an expectation that one day his dream would come true, that he would acquire what he wasn't destined to have, just like all the others who were searching for that dream of bliss. "Tomorrow we will run faster, stretch out our arms farther.... And one fine morning3/4" There was never anything that wasn't left to chance in the pursuit of the dream. Even though these people (pursuers of the dream) were given every indication that their plan was destined for failure, their resolve to acquire the dream was unwavering. A life filled with splendor, accompanied with people ardently pursuing this can only yield one result, dissatisfaction with life, and a continued search for what isn't real. ?? ?? ?? ?? ...read more.