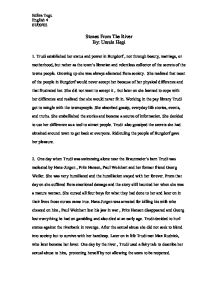 Stones From The River

Stones From The River By: Ursula Hegi 1. Trudi established her status and power in Burgdorf , not through beauty, marriage, or motherhood, but rather as the town's librarian and relentless collector of the secrets of the towns people. Growing up she was always alienated from society. She realized that most of the people in Burgdorf would never accept her because of her physical difference and that frustrated her. She did not want to accept it , but later on she learned to cope with her difference and realized that she would never fit in. Working in the pay library Trudi got to mingle with the townspeople. She absorbed gossip, everyday life stories, events, and truths. She embellished the stories and became a source of information. She decided to use her difference as a tool to attract people. Trudi also gossiped the secrets she had obtained around town to get back at everyone. Ridiculing the people of Burgdorf gave her pleasure. ...read more.

3. Leo Montag , Trudi's father, suffered a great deal of pain when his dear wife Gertrude died when Trudi was only 4. When she died Leo had Herr Abramowitz took pictures of her in her coffin. He hung those pictures in his bedroom to always remember her. After Gertrude's death numerous women flirted with Herr Montag , to bring him back his happiness with a possible marriage. Several married women flirted with Leo also, but he always managed to refuse their proposals. The women of Burgdorf envied the love and compassion that Leo had given Gertrude through the years and his continuing love and devotion for her. They also longed to be loved and understood by their husbands. Men that were good listeners were hard to find in Burgdorf so many women went to Leo for answers to their problems. He had a big heart and enjoyed helping others. He was the ideal man to them. ...read more.

7. An unknown benefactor played the role of a mysterious Santa Claus in the Burgdorf community, bringing gifts to those in need. Nobody could understand how this person knew all their wants and needs. The unknown benefactor was Burgdorf's angel , the only interesting thing about the lifeless town of Burgdorf. Trudi felt that his identity should remain a secret , and if it didn't, it would take away the only spark of light the town had. He symbolically removed some of the pain Hitler's tyranny had caused. Later on the identity of the unknown benefactor was revealed. It was Emil Hesping, the man who soon after Trudi learned had an affair with her mother. Emil Hesping was killed by an officer when he removed Hitler's statue from the town's square. There were records found in his home of all the gifts he had ever given. The people of Burgdorf never forgot the unknown benefactor. He remained in their hearts forever. ?? ?? ?? ?? Edlira Tegu English 4 07/09/02 ...read more.