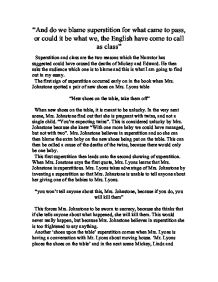 Superstition and class are the two reasons which the Narrator has suggested could have caused the deaths of Mickey and Edward. He then asks the audience which one is to blame and this is what I am going to find out in my essay.

"And do we blame superstition for what came to pass, or could it be what we, the English have come to call as class" Superstition and class are the two reasons which the Narrator has suggested could have caused the deaths of Mickey and Edward. He then asks the audience which one is to blame and this is what I am going to find out in my essay. The first sign of superstition occurred early on in the book when Mrs. Johnstone spotted a pair of new shoes on Mrs. Lyons table "New shoes on the table, take them off" When new shoes on the table, it is meant to be unlucky. In the very next scene, Mrs. Johnstone find out that she is pregnant with twins, and not a single child. "You're expecting twins". This is considered unlucky by Mrs. Johnstone because she knew "With one more baby we could have managed, but not with two". Mrs. Johnstone believes in superstition and so she can then blame the extra baby on the new shoes being put on the table. This can then be called a cause of the deaths of the twins, because there would only be one baby. ...read more.

Chance is behind all the events which I have mentioned so far. Apart from the shooting, none of the superstitions have anything to do with the event that followed. The shooting did not even have a real superstition there. One reason for the deaths of Mickey and Edward was their love lives with Linda. Is it chance that they were both in love with her. In fact the main reason why Mickey wanted to kill Edward is because he had stolen Linda from him. "Just one thing I had left, Eddie - Linda - an, I wanted to keep her." It is also chance that Mickey's brother is an extremely bad role model. "I wish I was our Sammy... He's got two worms and a catapult... Y' wanna see him spit.. He wees straight through the letter box." This behavior sends Mickey on the wrong track. Chance also occurs when Mickey does not know if the gun he shoots Edward with is loaded. The Narrator also tells us that class could be blamed for the deaths of Mickey and Edward. Mickey is raised in a working class family and Edward is raised in a middle class family. ...read more.

It does seem like the story had a large amount of bad luck for everyone compared to the amount of good luck. There are many ifs and buts to consider, such as whether the gun was loaded to if only Mrs. Johnstone had a single child instead of twins. I think that the case for blaming the deaths of Mickey and Edward on class is much better. Edward is able to get a good education just because his parents can afford to pay for a good school. People like the policeman treated him differently because he came from a working class family. The working class tracks were set on a downhill course for Mickey, in contrast Edward was given a much easier start to life. Overall it seems like class can be partly blamed for the deaths of Mickey and Edward. None of the signs of class differentiating them were directly assisted with the deaths of Mickey and Edward but they would not have died if they had been brought up in the same standard of living. Instead of blaming superstition though we should blame chance instead. Without a doubt bad luck contributed to the deaths of Mickey and Edward. The toast always seemed to land butter side down for them both. ...read more.