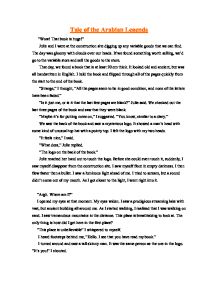 Tale of the Arabian Legends

Tale of the Arabian Legends "Wow! That book is huge!" Julie and I were at the construction site digging up any variable goods that we can find. The day was gloomy with clouds over our heads. If we found something worth selling, we'd go to the variable store and sell the goods to the store. That day, we found a book that is at least 20 cm thick. It looked old and ancient, but was all handwritten in English. I held the book and flipped through all of the pages quickly from the start to the end of the book. "Strange," I thought, "All the pages seem to be in good condition, and none of the letters have been faded." "Is it just me, or is it that the last few pages are blank?" Julie said. We checked out the last three pages of the book and saw that they were blank. "Maybe it's for putting notes on," I suggested. "You know, similar to a diary." We saw the back of the book and saw a mysterious logo. It showed a man's head with some kind of unusual top hat with a pointy top. I felt the logo with my two heads. "It feels nice," I said. "What does," Julie replied. "The logo on the back of the book." Julie reached her hand out to touch the logo. Before she could even touch it, suddenly, I saw myself disappear from the construction site. ...read more.

"Arabian, when I was attacked by an army, I almost got killed, but every single creature suddenly died expectedly. What happened?" Arabian smiled, "You don't have to defeat an enemy with your own brute force. You are the ruler of the Ordish Horde. You should know how to command your army." He then disappeared. I was confused, so I opened the book and read on from where I stopped. I could command the Ordish horde because I am the leader. "Cool. I have an army!" I said euphorically. "First of all, I'll need to find the main base of the Ordish Horde. "Woah! That is humongous!" I reached the base in no time. I saw tents everywhere with towers around the base. During that time, I learnt some fighting techniques and acrobatic moves that may help against these spirits. Before I walked into the base, I decided to read a bit more of Arabian's book. It says that before battle, my men will shout "O di ma shi" and salute. "O di ma shi!" The whole camp shouted and raised their arms, as the Germans did to Hitler. I assumed that raising their arm like that was their salute. "We are ready for battle," One of the men said. "Ok then, move out!" I directed my army. Every man got ready with their arrows and spears. There were swordsmen, archers with heavy plated armor and shields. ...read more.

He looked back and didn't see me. His skin was so thick and rubbery; I guess I didn't hurt him before. I climbed up onto his head and he noticed me. He flew downwards with pronominal velocity. I held on tight and saw his eye. I stabbed it with my spear and Ibils screamed. He was out of control, flying in all directions. He was flying into the lava. I quickly jumped off and landed in one of the tents. I quickly got out of the tent and saw Ibils fly into the pool of lava. "I did it!" I shouted with success. I opened Arabian legends and saw the words in the last page. I smiled and saw Arabian. "You did it." Arabian hugged me, "How can I repay you?" "There's no need for that." I replied. Suddenly, I disappeared into nothingness again like before and I flew fast, but not as fast as Ibils did. I saw the light and flew right into it once again. "Argh. My head." I groaned. "What's wrong?" I saw Julie again. We were in the construction site again as it were before. "How come your head hurts?" It looked as time didn't move when I was in the book. "Julie, you won't believe this." That is when I told her everything. Note: If writing is like this, then Ross is telling the story to other people as it happened it the past. If writing is like this, then this is what is happening as it were the present time. This is another type that I found out during the project. ...read more.