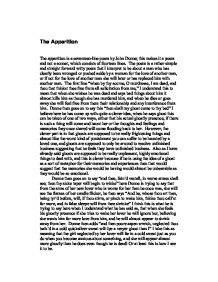 The Apparition The apparition is a seventeen-line poem by John Donne; this makes it a poem and not a sonnet, which consists of fourteen lines. The poem is a rather simple and straight forward witty poem that I interpret to be about a man who has clearly been wronged or pushed aside by a woman for the love of another man, or if not for the love of another man she will later or has replaced him with another man. The first line "when by thy scorne, O murdresse, I am dead, and thou that thinkst thee free from all solicitation from me," I understand this to mean that when she wishes he was dead and says bad things about him it almost kills him as though she has murdered him, and when he dies or goes away she will feel free from them their relationship and any interference from him. ...read more.

Also as I have already said ghosts are supposed to be really unpleasant, highly emotional things to deal with, and this is clever because if he is using the idea of a ghost as a sort of metaphor for their memories and experiences then that would suggest that the memories she would be having would almost be unbearable as they would be so emotional. Donne then goes on to say "and thee, fain'd vestall, in worse armes shall see; then thy sicke taper will begin to winke" here Donne is trying to say that from the arms of her new lover who is worse for her than he once was, she will see the flames of her candle flicker, he then says "And he, whose thou art then, being tyr'd before, will, if thou stirre, or pinch to wake him, ...read more.

Or at least this is how I see it to be. Finally Donne says "What I will say, I will not tell thee now, lest that preserve thee'; and since my love is spent, I'had rather thou shouldst painfully repent, than by my threatnings rest still innocent." This part is a bit confusing to me, but I make this of it, he is trying to say to her here that he will not tell her what he will say to her when he haunts her, in case she is safe in the knowledge of what he will say, and because his love is already used up, because as he is bitter for this he would rather see her painfully repenting her actions, behaviour and whatever else she has done wrong, than live an innocent life because of the threats he has made to her. ...read more.