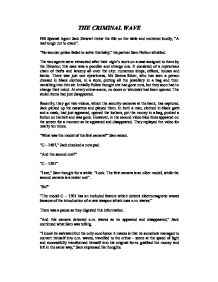 THE CRIMINAL WAVE FBI Special Agent Jack Stewart threw the file on the table and muttered loudly, "A real tough nut to crack". "No wonder police failed to solve this baby," his partner Sam Nolton whistled. The two agents were exhausted after their night's work on a case assigned to them by the Director; this case was a peculiar and strange one. It consisted of a mysterious chain of thefts and larceny all over the city: numerous shops, offices, houses and banks. There was just one eyewitness, Ms Serena Riker, who has seen a person dressed in black clothes, in a store, putting all the jewellery in a bag and then vanishing into thin air. Initially Police thought she had gone nuts, but they soon had to change their mind. At every crime-scene, no doors or windows had been opened. The stolen items had just disappeared. Recently, they got two videos, which the security cameras at the bank, has captured. Jack picked up the cassettes and played them. In both a man, clothed in black garb and a mask, had just appeared, opened the lockers, put the money in a bag, pushed a button on his belt and was gone. However, in the second video blue lines appeared on the screen for a moment as he appeared and disappeared. They replayed the video for nearly ten times. ...read more.

"Do you think this murder was pure coincidence?" Sam asked. "I don't believe in coincidences." Jack replied. Another odd burglary had taken place the night before and the press was raising hell - they could feel the pressure. They checked the computer. Every file in it has been deleted, except one: AND. It contained nothing. "And?" Sam muttered. "What kind of a stupid name is that?" "I don't think its 'and' its probably 'A.N.D.' some kind of an abbreviation, I guess". "May be," After some work they found out that Professor had used a certain program to ensure that nobody could delete that file. However, someone had managed to erase all the contents, obviously the same someone (or an accomplice) had murdered Parkinson. As they checked the office records they found out that all trace of research had vanished. The secretary, who had received the call, was also nowhere to be found. However, one fact interested them: Professor's assistant, Dean Hardy, had also disappeared two months ago. After some more investigation, they made another theory: Dean had somehow copied all the research work, corrected the flaw and decided to use it to his benefit. They now had a suspect. -------------------------------- That afternoon, the two crime-fighters were sitting in a cafeteria, waiting for their coffee. "I am still thinking about that file name, 'and' or 'A.N.D.' as you think. Surely it must mean something important and relevant to the case," Sam spoke aloud. ...read more.

On the tip there was a small trace of blood, when the criminal had opened the locker using he handle, the pin has pierced his hand. They smiled at the success of their plan, took the blood for testing and found the D.N.A. code. Using the code they calculated the wavelength and frequency of the "criminal" wave. Using a newly invented machine, they would cause that e.m. wave (whenever it came) to converge into a room full of a slightly poisonous gas. However, they had to erect a large number of aerials on high buildings in all parts of city. As the "Dean wave" would transform into his original self, he would inhale the gas and faint immediately. The FBI would them quickly catch the felon and take into possession the new transport technology. The director had given them special orders to obtain this technology at all costs. Three days later, he attempted another theft. FBI has kept the machine on, so that whenever the convict strikes, he would fall right into their trap. The plan was successful and Dean was caught. Under pressure and slight torture, he spilled out where he had hidden the loot, which was immediately recovered. The Director was extremely happy and personally met the two agents. The two however, wanted to have a vacation; a pretty long one. They planned to spend some more time on scientific research, especially on the theory they had just developed. ...read more.