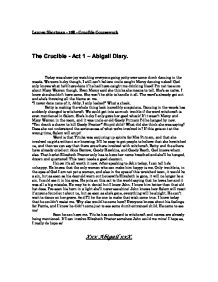 Lauren Shortman - 10R - Crucible Coursework The Crucible - Act 1 - Abigail Diary. Today was sheer joy watching everyone going potty over some dumb dancing in the woods. We were lucky though. I still can't believe uncle caught Mercy dancing naked! God only knows what he'd have done if he had have caught me drinking blood! I'm not too sure about Mary Warren though. Even Mercy said she thinks she means to tell. She's so na�ve. I knew she shouldn't have come. She won't be able to handle it all. The word's already got out and she's throwing all the blame on me. "I never done none of it, Abby. I only looked!" What a cheek. Betty is making the whole thing look incredibly suspicious. Dancing in the woods has suddenly changed to witchcraft. We could get into so much trouble if the word witchcraft is even mentioned in Salem. She's lucky I only gave her good whack! If it wasn't Mercy and Mary Warren in the room, and it was uncle or old Goody Putnam I'd be hanged by now. "You drank a charm to kill Goody Proctor!" Stupid child! What did she think she was saying? Does she not understand the seriousness of what we're involved in? If this gets out at the wrong time, Salem will erupt! Word is that Tituba was conjuring up spirits for Mrs Putnam, and that she involved us girls without our knowing. It'll be easy to get people to believe that she bewitched us, and then we can say that there are others involved with witchcraft. ...read more.

When this is all over I'm taking my children and John and I'm getting out of this town once and for all. I'm begging the Lord to help us through this. I just want Abigail out of our lives for good. I'm going to make that girl suffer for this! Xxx Elizabeth Proctor xxX Act 3 - John Proctor Diary. Elizabeth is pregnant. My wife is sitting lonely in jail, accused of being a witch and she's pregnant. Can't Abigail see what she is doing? She has already wrecked my marriage, now she's playing with the lives of my wife and children! What has come of this? What has come of this? Why does she have to lie? Why doesn't she understand? It is Elizabeth I love, not her! How is it she manages to manipulate all those poor girls? Questions. That's all they are. Questions. No one can answer them. Accusations, people listen to. Lies, people listen to. Rumours, people listen to. But the truth? No one wants to hear the truth. They want stories. Gossip. Well it's my wife that all the gossip is about! My wife and my friends wives! Like Hale said, today he has signed away the soul of Rebecca Nurse, and seventy-one others, and I'm the only person on this earth who knows that it is all lies. But there is nothing I can do about it. I've told them that Abigail told me it was all sport, yet they choose to believe that she was under the control of a spirit, and the show she put on to make them believe it! ...read more.

The only judge is God, and soon everyone will meet his or her judgement day. I would give anything to see the day when Abigail Williams meets hers. As for Salem, I hope it can rebuild its society. I am not staying around to see if it does. At dawn today, I saw the last executions of the Salem witch trials take place, and that is something I will never forget, I will never forgive myself for not doing more to save the innocent souls of those who have been affected by this tragedy. This whole thing was a tragedy... Xxx Reverend Hale xxX The Crucible- by Arthur Miller Echoes Down the Corridor! Not long after the fever died, Parris was voted from office, walked out on the highroad, and was never heard of again. The legend has it that Abigail turned up later as a prostitute in Boston. Twenty years after the last execution, the government awarded compensation to the victims still living, and to the families of the dead. However, it is evident that some people still were unwilling to admit their total guilt, and also that the factionalism was still alive, for some beneficiaries were actually not victims at all, but informers. Elizabeth Proctor married again, four years after Proctor's death. In solemn meeting, the congregation rescinded the excommunications - this in March 1712. But they did so upon orders of the government. The jury, however, wrote a statement praying forgiveness of all who had suffered. Certain farms which had belonged to the victims were left to ruin, and for more than a century no one would buy them or live on them. To all intents and purposes, the power of theocracy in Massachusetts was broken. ...read more.