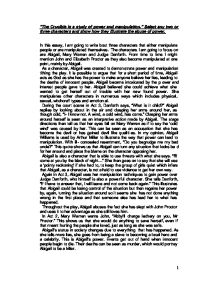 The Crucible is a study of power and manipulation.&quot; Select any two or three characters and show how they illustrate the abuse of power.

"The Crucible is a study of power and manipulation." Select any two or three characters and show how they illustrate the abuse of power. In this essay, I am going to write bout three characters that either manipulate people or are manipulated themselves. The characters I am going to focus on are Abigail, Mary Warren and Judge Danforth. From time to time I might mention John and Elizabeth Proctor as they also become manipulated at one point, mainly by Abigail. As a character, Abigail was created to demonstrate power and manipulation tithing the play. It is possible to argue that for a short period of time, Abigail acts as God as she has the power to make anyone believe her lies, leading to the deaths of innocent people. Abigail became intoxicated by the power and interest people gave to her. Abigail believed she could achieve what she wanted to get herself out of trouble with her new found power. She manipulates other characters in numerous ways which includes physical, sexual, witchcraft types and emotional. During the court scene in Act 3, Danforth says, "What is it child?" Abigail replies by looking about in the air and clasping her arms around her, as though cold, "I- I know not. A wind, a cold wind, has come." Clasping her arms around herself is seen as an interpretive action made by Abigail. ...read more.

An important scene for Abigail is in Act 3, where she appears to see a yellow bird in order to escape Hale's accusations, who has always seen Abigail as false. "Why-? (She gulps.) Why do you come, yellow bird?" Automatically, Danforth believes her deception and turns against Mary Warren. John Proctor knows Abigail is lying and so tries to show this to Danforth with Hale's help, but is silenced straight away. Towards the end of the scene, Abigail has managed to turn the situation around so that Mary Warren turns against John and, in doing so, returns to Abigail and the girls to save herself from an almost certain death. By writing this scene, I believe Miller was showing off Abigail's power of manipulation at its best. By comparison, Danforth does not manipulate other characters nearly as much as Abigail but it is still apparent that it happens. The main scene which includes Danforth manipulating others is in Act 3 where he interrogates Elizabeth about her husband, John Proctor, and Abigail, "(reaches out and holds her [Elizabeth's] face, then) Look at me! To your knowledge, had John Proctor ever committed the crime of lechery? (In a crisis of indecision she can not speak.) Answer my question! Is your husband a lecher!" Danforth asks this question repeatedly until he gets the answer he wants to hear. Even if Danforth had realized Abigail was deceiving him and everyone else, he would have carried on with heir lies to protect ...read more.

Danforth, who always seems to believe Abigail, turns against Mary Warren, who was a part of the group of girls accusing people in the public of using witchcraft, and asks Mary Warren about what she is supposedly doing to Abigail, "Danforth: (Himself engaged and entered by Abigail.) Mary Warren, do you witch her? I say to you, do you send your spirit out?" This then eventually causes John Proctor to prove to Danforth that Abigail can not be trusted by telling everyone what has happened between him and Abigail. Mary, as a character, is not strong enough to stand up to a character like Abigail for a fear of what could happen to her. This shows us that the point of Mary's character is to show the audience Abigail's evil qualities and possibly what Abigail is capable of to protect herself. In conclusion, Abigail had the ability to push around anybody, something she would not have been able to do if the trials for witchcraft had not taken place. Abigail is possibly the most manipulative character in modern literature. By creating Abigail, I believe that Arthur Miller was trying to capture the events of what was happening within his own society at the time. From writing this essay, I have learned that this play is a study of power and manipulation as there is a vast amount of it within just one piece of literature. By writing 'The Crucible', Arthur Miller has shown his readers that if one person is given too much power, no good would possibly come from it. ?? ?? ?? ?? 1 ...read more.

There are some good points made here about characters' roles and purpose; I would have liked to have seen further study of 'abuse of power' as an overriding theme and how it can be used to link all of the characters and the main points in the plot. Some analysis of language is present but there needs to be further focus on language, structure and form.