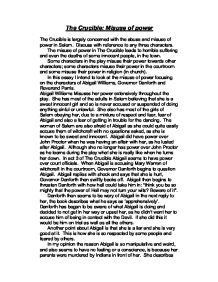 The Crucible: Misuse of power.

The Crucible: Misuse of power The Crucible is largely concerned with the abuse and misuse of power in Salem. Discuss with reference to any three characters. The misuse of power in The Crucible leads to horrible suffering and even the deaths of some innocent people, in the town. Some characters in the play misuse their power towards other characters; some characters misuse their power in the courtroom and some misuse their power in religion (in church). In this essay I intend to look at the misuse of power focusing on the characters of Abigail Williams, Governor Danforth and Reverend Parris. Abigail Williams Misuses her power extensively throughout the play. She has most of the adults in Salem believing that she is a sweet innocent girl and so is never accused or suspended of doing anything sinful or unlawful. She also has most of the girls of Salem obeying her, due to a mixture of respect and fear, fear of Abigail and also a fear of getting in trouble for the dancing. ...read more.

Beware of it". Danforth then seems to be wary of Abigail in the next reply to her, the book describes what he says as 'apprehensively'. Danforth has began to be aware of what Abigail is doing and decided to not get in her way or upset her, as he didn't want her to accuse him of being in contact with the Devil. If she did this it would be him on trial as well as all the others. Another point about Abigail is that she is a liar and she is very good at it. This is how she is so respected by some people and feared by others. In my opinion the reason Abigail is so manipulative and weird, and also seems to have no feeling or a conscience, is because her parents were murdered by Indians in front of her. ...read more.

Reverend Parris preaching things like this in his sermon strikes fear into the townspeople, as they begin to think Hell is upon them and this causes chaos to break out, as they begin to yell and scream at one another. Reverend Parris hates to be wrong, in the courtroom even when he realised that he is wrong to accuse all the people involved, he still sticks to his beliefs however wrong they may be. Parris causes innocent peoples deaths all because of his beliefs, stubbornness, selfishness and his misuse of power. I have reached the conclusion that the characters in The Crucible do misuse their power; the two characters I chose demonstrate this theory very well. Not all the characters in the play do, but there are many characters that do. This selfish act of misusing power in The Crucible is very influential to how the plot develops. Without Abigail Williams acting like a selfish, irresponsible strumpet, or Reverend Parris being selfish and power-hungry The Crucible would have lost its whole page-turning ominous, experience. ...read more.