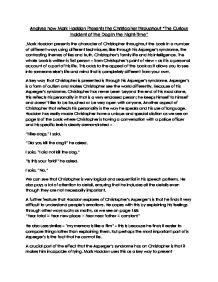 The Curious Incident of the Dog in the Night-Time

Analyse how Mark Haddon Presents the Christopher throughout "The Curious Incident of the Dog in the Night-Time" Mark Haddon presents the character of Christopher throughout the book in a number of different ways using different techniques; like through his Asperger's syndrome, the contrasting themes of lies and truth, Christopher's family life and his intelligence. The whole book is written is first person - from Christopher's point of view - as it is a personal account of a part of his life. This adds to the appeal of the book as it allows you to see into someone else's life and mind that is completely different from your own. A key way that Christopher is presented is through his Asperger's syndrome. Asperger's is a form of autism and makes Christopher see the world differently. Because of his Asperger's syndrome, Christopher has never been beyond the end of his road alone, this reflects his personality in that is a very enclosed person; he keeps himself to himself and doesn't like to be touched or be very open with anyone. Another aspect of Christopher that reflects his personality is the way he speaks and his use of language. ...read more.

Mark Haddon often uses humour in the book to highlight or emphasise an important event and often achieves this through Christopher's honesty; 'a lady...took the big suitcase away and she said, "Have you touched this?" And I said, "Yes." And then she went away.' But there is also a great contrast in the book between Christopher's honesty and his family life that is corrupted by lies. Mark Haddon uses Christopher's family life and the effect it has on him to present his character. Christopher's parents split up because there is no trust left in the marriage and his mother can't cope. When his mother leaves, Christopher's father lies to him by telling him that his mother is dead as he thinks, at the time, that it is the best thing to do. However, I think that one of the points Mark Haddon tries to get across in the book is that we have to accept our lives and that our only escape is not to run away, but to learn to love the people we are and the situation in which we find ourselves; as Christopher says himself - "people go on holiday to see new things...but I think that there are so many things in one house that it would take years to think about all of them properly." ...read more.

Throughout the book we see Christopher grow as a person and his self-confidence develops, "I was brave and I wrote a book and that means I can do anything." But throughout the whole book we see Christopher's intelligence demonstrated in different ways. When asked his age he replied with, "I am 15 years and 3 months and 2 days." But his almost obsessive attention to details often gives people the impression that he is mocking them. This gives the reader the impression he is a very misunderstood character which evokes our sympathy. Christopher says at the beginning of the book - "I am going to prove that I am not stupid." Again, it is ironic that people perceive Christopher as stupid when in fact he is incredibly intelligent. Throughout the book, Mark Haddon presents Christopher through a number of different devices. The most important out of these I think is the effect his family life has on him: the contrast between Christopher's need to tell the truth and the lies surrounding his family. I think the purpose of this is to show how fragile the stability of home life is for children and how it can be corrupted by lies. It also shows the adverse effect things such as broken homes can have on children. ...read more.