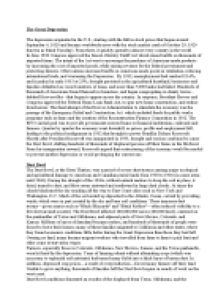 ﻿The Great Depression The depression originated in the U.S., starting with the fall in stock prices that began around September 4, 1929 and became worldwide news with the stock market crash of October 29, 1929 (known as Black Tuesday). From there, it quickly spread to almost every country in the world. In June 1930 Congress approved the Smoot?Hawley Tariff Act which raised tariffs on thousands of imported items. The intent of the Act was to encourage the purchase of American-made products by increasing the cost of imported goods, while raising revenue for the federal government and protecting farmers. Other nations increased tariffs on American-made goods in retaliation, reducing international trade, and worsening the Depression. By 1932, unemployment had reached 23.6%, and it peaked in early 1933 at 25%, drought persisted in the agricultural heartland, businesses and families defaulted on record numbers of loans, and more than 5,000 banks had failed. Hundreds of thousands of Americans found themselves homeless, and began congregating in shanty towns - dubbed Hoovervilles - that began to appear across the country. In response, President Hoover and Congress approved the Federal Home Loan Bank Act, to spur new home construction, and reduce foreclosures. The final attempt of the Hoover Administration to stimulate the economy was the passage of the Emergency Relief and Construction Act which included funds for public works programs such as dams and the creation of the Reconstruction Finance Corporation in 1932. ...read more.

Farmers, especially those in Colorado, Oklahoma, New Mexico, Kansas, and the Texas panhandle, were hit hard by the depression. Years of farming wheat without alternating crops (which was necessary to replenish soil nutrients) had turned many fields into a thick layer of barren dust. In addition, depressed crop prices?a result of overproduction?forced many farmers off their land. Unable to grow anything, thousands of families left the Dust Bowl region in search of work on the west coast. Dust Bowl conditions fomented an exodus of the displaced from Texas, Oklahoma, and the surrounding Great Plains to adjacent regions. More than 500,000 Americans were left homeless. 356 houses had to be torn down after one storm alone. Many Americans migrated west looking for work. Some residents of the Plains, especially in Kansas and Oklahoma fell ill and died of dust pneumonia or malnutrition. The Dust Bowl exodus was the largest migration in American history within a short period of time. By 1940, 2.5 million people had moved out of the Plains states; of those, 200,000 moved to California. With their land barren and homes seized in foreclosure, many farm families were forced to leave. Migrants left farms in Oklahoma, Arkansas, Missouri, Iowa, Nebraska, Kansas, Texas, Colorado and New Mexico. ...read more.

Historical Context The Historical context in the story "Of Mice and Men" consists of the Great Depression and the Great Dust Bowl. The Great Depression was an economic downfall that began in some countries in 1928. The Great Dust Bowl was a series of dust storms causing major ecological and agricultural damage to American and Canadian prairie lands from 1930 to 1936, caused by severe drought coupled with decades of extensive farming without crop rotation or other techniques that prevented erosion. During the late 1930s, California was struggling not only with the economic problems of the Great Depression, but also with severe conflict between laborers. Labor conflicts occurred on the docks and packing sheds and fields Steinbeck wrote about the struggles of migrant farm workers. Agriculture as a working-culture was undergoing a historic change. In 1938, about half the nation's grain was harvested by mechanical combines that enabled five men to do the work that had previously required 350. Only a short time before, thousands of travelling single men had roamed the western states following the harvests. Because of the addition of combines to the fields, the owners of the land had to hire smaller amounts of farmhands. Getting a job was much harder. The use of hundreds of men as laborers was no longer necessary, and only 5 men were needed to work the combine. The job had little pay and long hours. ...read more.